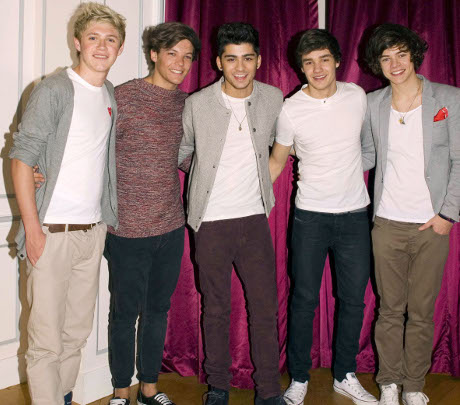 One Direction’s Harry Styles, Zayn Malik, Niall Horan, Liam Payne, and Louis Tomlinson are struttin’ their stuff at all the awards shows and parties associated with the classiest month in the Celeb World. With Harry Styles’ Taylor Swift split, and his immediate romp with a new lady at a GQ dinner, One Direction has been having a fun time in the news.

You might think Harry is a bit of a douchebag for running from Taylor and hooking up with some random Welsh actress, but I’m not here to discuss that scandalosity. At least not today. Perhaps in the coming days we will examine who in One Direction is the biggest douchebag. There’s always enough space on the interwebz to discuss douchebaggery in the Celeb World.

So far we’ve determined who had the highest Celeb IQ, chatted about the not-so-secret sex lives of the bandmates, and even attempted to delineate who’s the most hated and despised. So who’s the biggest baby in the band?

It’s hard to tell, especially because Taylor Swift hasn’t yet released any of her new I-Hate-Harry-Styles-I-Freaking-Hate-Harry-Styles songs. Once that happens, you know Harry Styles is going to respond (either indirectly or directly), and my bet is on the fact that he’ll try and play the innocent card. How many tears do you think he’ll spill after the Queen of Break Up songs cuts him down to size with her fiery lyrics?

While I want to give the Biggest 1D Baby title to Harry Styles, the awards goes to Niall Horan. Not only does he look like a baby fresh out of daycare, transparent braces and all, but he’s absolutely terrified of pigeons. You’d think he’d be scared of all the screaming fans or the possibility of never having a normal teenage life, but the basic truth of the matter is . . . he’s afraid of birds.

He told The Sun a while back about his legitimate fear: “I get really nervous if pigeons are flying around before shows. I can’t stand them after one once flew in through my bathroom window and went for me while I was having a wee.”

Well, we’d be terrified to if a pigeon tried to attack us while going pee. Thankfully, all the other 1Ders have vowed to protect Baby Niall from the feathery air demons of the world. At least for another two years. I wonder what he’ll do once their new you-must-stay-together-for-2-years agreement is up? Who do you think is the biggest baby in 1D?