One Direction’s Harry Styles, Zayn Malik, Niall Horan, Liam Payne, Louis Tomlinson: Who is the Most Hated and Despised? 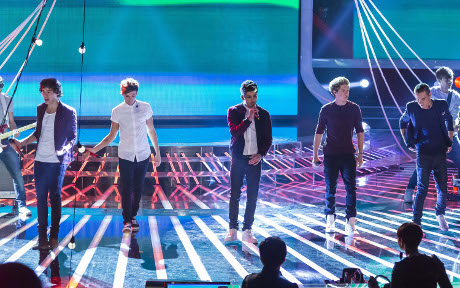 We’re going to continue with our “Who is/has/was” segment on One Direction because y’all just can’t get enough of these cray-crazy Brits. By many, the band is loved unconditionally, each member receiving equal amounts of love, affection, and randomly signed undergarments tossed at them while walking down the street (you know it’s happened). But just like with all singing groups, especially bands composed of younger individuals, there’s bound to be one member that just doesn’t quite make the cut in the fans’ eyes.

Do you think this is true of One Direction? Is there a hated, despised, or looked-down-upon 1Der who just isn’t resonating strongly with fans?

This is such a tough question because hate for a celebrity is generally caused by doing something so scandalous, so outrageous, so asinine  in the Celeb World that even your fans must start to question their loyalty toward that celebrity. Harry Styles, Zayn Malik, Niall Horan, Liam Payne, and Louis Tomlinson really haven’t embraced the full scandalosity powers they have as celebrities and, therefore, are all received greatly by their fans.

However, there is one bandmate in particular that may be on the outs with a particular fan base. Can you all guess who? I think you can.

Once upon a time a blonde haired country singer with a proclivity for latching onto men, breaking up with said men, and then writing angsty songs about said men, fell in love with a guy from a British boy band. And three seconds later — after discussing babies, weddings, and the purchasing of mansions — a fiery break up erupted. If there’s any hated 1Der, then it’s definitely Harry Styles — and all that hate is coming from one direction exclusively: Taylor Swift fans. Taylor can do no wrong in the eyes of her fans, and after rumors surfaced of Harry Styles having cheated on T-Swifter, well, people got a taste of the scandalosity a One Direction bloke can generate.

All right, Harry. Time to give another one of your bandmates a chance to be the most hated 1Der. Who’s up next? Zayn Malik has expressed anxiety when it comes to fans, and he once eluded to the fact that he might leave the band. That would make some waves, and quickly take Harry Styles out of the running for Most Despised 1Der. But for now I think he takes the cake.

Wednesday we discussed who has the lowest Celebrity IQ (click to see who got the lowest score) and Thursday we looked at the sex lives of the 1Ders. What direction should we go next?