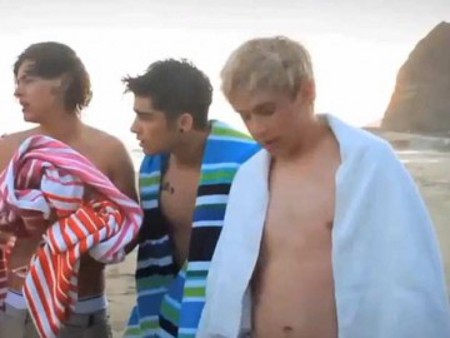 More One Direction news coming your way. One Direction’s Harry Styles, Liam Payne, Zayn Malik, Niall Horan, and Louis Tomlinson are always on people’s radar. The boy banders definitely aren’t shy about ripping everything off, especially their shirts. Screaming fans around the globe can’t seem to get enough of One Direction. And it’s probably because they are one of the biggest names in show business. NBD.

They recently signed an agreement stating that they’d be required to stay together as a group for a couple more years, so even if one of them wanted out, well, they’d be a bit out of luck. It looks like, if you’re a One Direction fan, you’re in luck. Not sure why any of the dudes would want to get out of the money machine, but sometimes drama ensues and the fame becomes too much. Everything seems fine now. Let’s hope it stays that way and they continue to live their carefree lives.

We’ve seen from Harry Styles that he likes to party hard, and he’s definitely not shy, despite having four nipples. He’s constantly seen without a shirt on. Wonder if Taylor Swift liked what she saw? Apparently she wasn’t super captivated by the naked Harry Styles — at least not enough to keep him in her pocket forever. Her reasoning: Why keep something for the heart when you can do so many more powerful, artistic things with a broken one? Wow, that’s so depressing, Taylor. But you know it’s how she thinks.

It’s a bit interesting and peculiar how the romantic lives of the other bandmates are so shady. Maybe it’s just because they have stabler love lives? Doubt that’s the case, but you never know, right? Check out the other One Direction posts CDL has been writing up lately and let us know what you think about all the bandmates.

One Direction photos below . . . . let us know who you wanna marry.