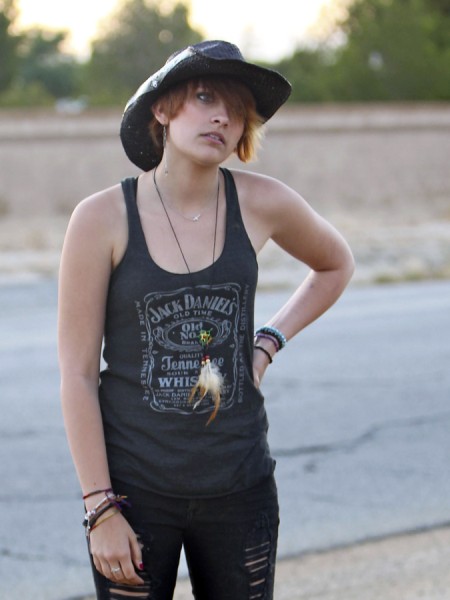 This really bothered me yesterday. I just feel for this little girl so much because that’s what she is – just a child. The 15-year-old was rushed to the hospital yesterday after her suicide attempt. Paris Jackson cut herself with a meat cleaver and tried to overdose on pills. Police now are labeling the whole thing as an attempt because it’s becoming clear her actions were a cry for help since she called a hotline beforehand. Sources told TMZ she likes the drama. But God damn. Who wouldn’t want some help when you come from that family?

The first sign of trouble should have been Debbie Rowe. Paris has been reaching out to her over the last couple of months clearing showing things at home weren’t great. Then you have the ongoing Michael Jackson trial and the resurfaced allegations that Paris, Prince Michael and Blanket aren’t even his biological children. Mix that with a little bit of school bullying and the fact that her family apparently wouldn’t let her go to a Marilyn Manson concert and we clearly have some issues. It’s so easy just to call a 15-year-old girl dramatic – and Paris certainly has love for oversharing on social media – but let’s give the girl a break on this one. Even with all her money it’s got to be difficult growing up a Jackson let alone Michael Jackson’s kid.

So I hope she gets the help and/or attention she needs. News outlets are saying this wasn’t a first-time thing. Pics of her with cuts on her arms are being shuffled around alleging she could have been cutting for awhile. Is Catherine Jackson going to notice these things? She might be a nice old grandma but I’m not sure if she’s equipped to handle a 21st century teenager at her age. And Janet’s off being in love with some billionaire and I’m not sure Paris would ever turn to her again after their bust-ups in the past. Then we have La Toya who’s never been confused of being the most stable one of the bunch. And that leaves Debbie – her biological mother who gave her away for money. So you tell me if this young girl has reasons to be dramatic. That word  bothers me the more I write it. In a family full of media hungry clowns how else is someone supposed to be heard without being a little dramatic?

EARSUCKER Has A Shocking Report On MJ’s Alleged Child Molestation – Read It By Clicking Here!