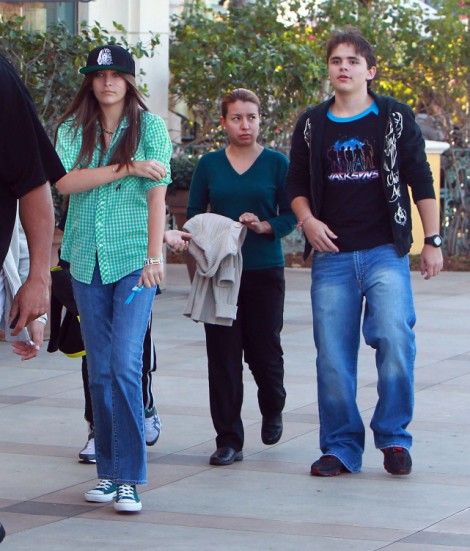 At first I thought this whole story was about Paris Jackson finding out that Michael Jackson wasn’t her real father. Come on sweet girl, ignorance is bliss but… come on. Even Stevie Wonder saw there was no resemblance. But then I found out the Paris Jackson suicide attempt was in reaction to her finding out that Prince Michael Jackson is not her full sibling. They were led to believe that Debbie Rowe and some other dude were their biological parents. That made a whole lot more sense. Those two don’t look a whole lot alike but it’s an easier sell. But it turns out there were two different daddies and that was enough to break the fragile teen.

According to The Sun the Jackson family told Paris a few days before her attempted suicide because they knew the information would get out during its current lawsuit against concert firm AEG. After learning the truth Paris and Prince started fighting constantly. A source said Paris took the news especially hard because she always idolized and looked up to her older brother.

On the one hand family is family and blood has nothing to do with it but I can see how this would mess with her head. After her father’s death she was thrown to the wolves essentially with all those money-hungry Jacksons and Prince Michael was probably the one person she could truly trust. Their bond was most likely even stronger because of their mutual parentage. Oddly enough, Blanket Jackson isn’t mentioned in any of this. How the hell is that kid doing?

This whole situation is so messed up. No wonder Paris is hanging with Debbie Rowe. Some reports say she’s going to live with her when she gets out of the hospital. Jesus Christ you just have to feel for this girl. She’s 15 and has no stability and this is the time she really needs it. And this is supposed to be the calm period. When Catherine Jackson dies the shit will hit the fan. There will be no one to wrangle in all those kids and grandkids. Hopefully Debbie Rowe can shelter Paris from that but I’m always a little wary of her motives too.

Do you think Paris Jackson’s paternity is what drove her over the edge? Is turning to Debbie Rowe a smart decision? Sadly, she doesn’t have many others at this point. I’ll always choose Debbie over La Toya or Tito  or a dude who named his kid Jermajesty any day.