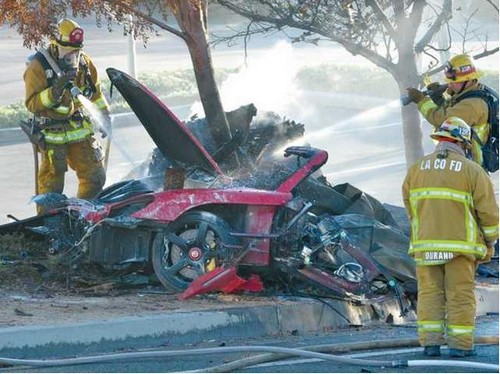 I have to say, I was really afraid that this might be the case. Less than 48 hours after the cherry red Porsche Carrera GT carrying Paul Walker and his good friend, Roger Rodas to their deaths crashed on a Santa Clarita, CA street we are hearing that they may have been racing another car. According to TMZ those on the scene shortly before the crash occurred say that Rodas and another vehicle were seen racing at a high rate of speed. It’s an area that is known for impromptu street races and while no other vehicle has been implicated, police are looking into the possibility of another car being ultimately involved.

We have also already told you that as of this morning speed certainly played a part in this accident and there is a strong possibility that the Porsche malfunctioned. Skid marks on the pavement were in a straight line which indicates that Rodas was unable to swerve to avoid crashing into a pole and tree – suspicion is that his power steering  locked making it impossible for him to miss the pole and tree that he eventually slammed into.

The car was reportedly having issues and so Rodas and Walker took it out for a ride. It must have been performing well during that ride if Rodas felt it was safe to have a street race, right? He and Walker had raced together before and while they both loved speed, they were also known to play it safe because of their children. Obviously something went very wrong here. Do you think that Rodas might have been racing another vehicle when his steering then locked up causing the inevitable crash? Tell us your thoughts in the comments below!