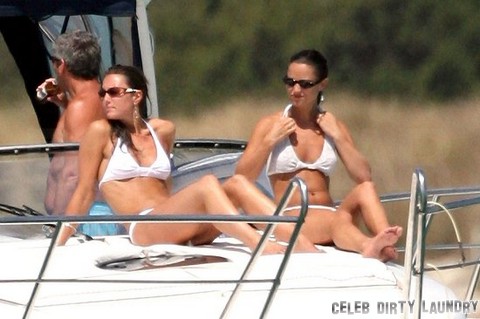 Pippa Middleton knows she’s in serious need of image rehab after her miserable attempt at being a published author – laughable, I know – and getting dumped by Alex Loudon because his mother didn’t approve of her. In fact, no titled man will have her – all of their mothers disapprove of her and the entire fame hungry, social climbing Middletons. They can see right through that entitled, self-serving clan.

Why is it that not a single one of them has one commoner friend? They were all ditched the higher they rose up the social ladder – that’s why. Pipps is known for being pleasant but also staring around the room for someone more important to talk to.

What then is a commoner-turned-socialite staring at dead ends to do?

Cue new boyfriend: Nico Jackson, stockbroker and son of a retailer. What? No title, no aristocratic pedigree, no grand manor home in the country, not privately educated?! Carole Middleton would never really allow Pipps to marry an untitled nobody. How would that look on the family tree? After how hard they all worked to climb the social ladder? After how much they ignore their own hardworking commoner roots? They’ve even invested in signet rings to raise the family’s status even higher!

So why the commoner boytoy? To make herself look less social climby and more desirable, of course! What’s the betting Pipps is just stringing him along and will ditch Nico as soon as she catches the attention of her old conquest – the future Duke of Northumberland?

It’s always possible she’s simply settling because she knows she can’t snag an aristo. If so, then she must be SO disappointed over failing to realize her lofty dreams of a title, an estate and a vast inheritance. Poor Pipparse.

And to be fair, is this guy really too good for Pipster? Seems like he’s uninterested in his own commoner roots, too. His last girlfriend wasn’t exactly from Essex. Alice Farquhar is the sister of one of Will’s old girlfriends, Rose, and their father is Captain Ian Farquhar, master of the Beaufort Hunt. Not too shabby, Nico. Hmmm… it looks like Pipps and Nics could be using each other to cement their social status.

Might make a good first marriage for the both of them!