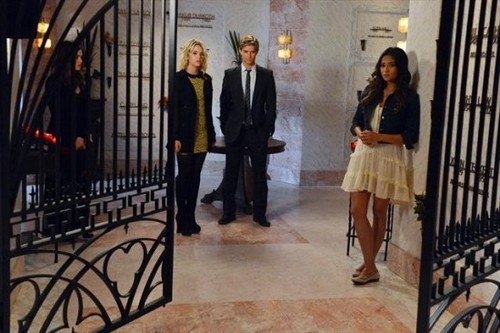 PRETTY LITTLE LIARS airs called “What Becomes of the Broken-Hearted.” On tonight’s show Rash decisions are made when dealing with a wounded heart.  Did you watch last week’s show? We did and we recapped it here for you!

On last week’s show now that Ali’s remains are back with her family, the DiLaurentises were set to bury her again, giving Aria, Emily, Hanna and Spencer another opportunity to say goodbye to their friend. With everything that had gone on since Ali’s disappearance, the girls were divided about going to yet another memorial. Aria, Hanna and Emily were ready for another round of goodbye, if not for them but to also support Jason. Spencer, on the other hand,  had enough and wanted nothing to do with the burial. Meanwhile, Emily went to visit Dr. Sullivan to help with her unresolved feelings about killing Nate, but came away with much more than expected.

On tonight’ show when dealing with matters of the heart, people react in many different ways: Still crushed over her break-up, Spencer continues her downward spiral as she now takes her anger and hurt out on Mona. Caleb, on the other hand, hides his pain by being closed off when discussing his father. But when Hanna devises a plan to bring father and son back together, will that help Caleb heal old wounds or just make things harder? And Aria, who is still missing Ezra, finds she is spending more time with Wes.

Meanwhile, Emily and Jason work together to put together the pieces of Ali’s trip to Cape May and what really happened during that vacation.

Tonight’s episode begins with a whole bunch of loose ends everywhere. Spencer is desparately trying to get her spot on the team back so she goes head to head with Andrew. They begin playing a game of strip something with the winner being left naked. Emily arrives with cupcakes as Andrew is down to his boxers and rips Spencer apart for stooping so low in order to get what she wants.

Hannah realizes that Caleb’s uncle is actually his real father and tries to talk him into coming clean. She believes Caleb knowing the truth will make a huge difference but his uncle disagrees.  Later when she talks to Caleb he is simply not ready to talk to the man who is his real father is.

Spencer is feeling stupid for taking her bra off at 4 in the afternoon in order to get what she wants and Ren shows up to discuss the situation with her. Instead of making her feel awful he seems pretty understanding of her actions.  Caleb decides he wants his food to go

Caleb does decide to meet with his uncle but as he and Hannah waits it looks like they’ll be stood up. Emily goes to talk to Jason and tells him her suspicions about Wheldon. After talking they return to Jason’s to find bottles of booze lined up all over his porch. Emily also receives a blocked text from A taunting them about the booze.

Emily and Jason leave and go through his dads old stuff looking for old photos of Ali. Jason is looking for a photo from right before she died that might link her to Wheldon.

Spencer makes it up to the competition where she goes toe to toe with Mona. Mona makes the mistake of mocking Spencer and asking her if she has any friends left. Spencer dives over the table and chokes Mona until Andrew pulls her off of her and removes her.

Caleb and Hannah talk after he finishes with his dad and he tells her that his father thinks she’s remarkable. Hannah and Caleb share a kiss in church while discussing the meeting.

Emily and Jason get in the elevator to go home and it starts to malfunction. Lights flashing and it’s clear that they’re in trouble. Caleb pry’s the door open so that there’s a space for Em to try and jump out between floors. She makes it and when its Jason’s turn to get out the elevator door shuts and the elevator car drops quickly as Emily screams.  Jason survives but ends up in the hospital.

He tells Emily that it’s clear that someone wants him gone. Emily is in the hallway filling in Aria, Hannah and Spencer when a nurse asks them where Jason disappeared to. Sure enough his bed is empty! Tune in next week for more Pretty Little Liars!