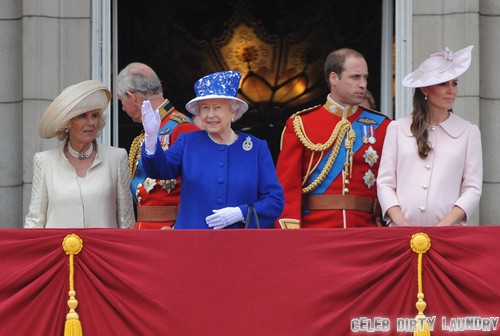 Ah, to be a fly on the wall in Clarence House. There was a recent conversation between Prince Charles and Camilla Parker-Bowles that will go down in Royal history as a total game changer. While Camilla has spent the last 30 plus years waiting for the moment when she can ascend the throne as Queen beside Charles, he has now made it abundantly clear that he has another plan all together. According to the Nov. 18th print edition of National Enquirer Charles has thought long and hard about his birthright and he is keenly aware that Queen Elizabeth’s days are likely numbered.

After the birth of Prince George it really clicked for Charles just how beloved his son Prince William and Kate Middleton really are. They are also widely respected and now as parents they are more in touch with the problems facing young families. All of this caused Charles to decide that even if his mother abdicates he will pass the crown onto William because it is in the best interest of the country that he loves.

Needless to say, Cami didn’t take this news well at all. It may be Charles’ birthright to be King but for some reason Camilla feels absolutely entitled to the position of Queen and it’s a seat that absolutely no one wants to see her take. Camilla is insisting that Charles keep the crown but as of now the warring couple is deadlocked in battle. Camilla has made his life an embarrassing hell with her drunken rages and then there are those recent topless photos that hit the internet. If Charles wants to get revenge then killing Camilla’s chance of being queen is certainly the way to do it. Do you think his decision is rooted even a little bit in revenge? Tell us your thoughts in the comments below!