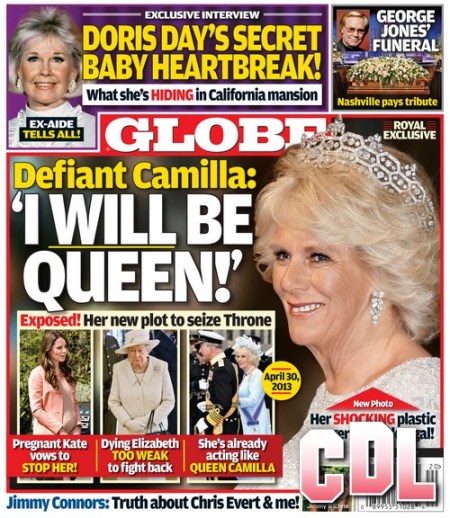 After months of rampant talk and insider speculation some serious changes have begun taking shape in the way that the royal family handles its current business. There have been a lot of rumors floating about the health of Queen Elizabeth and the 87-year old work horse has never been one to shrug off any of her duties whatsoever, at least until now. In the last few weeks things have clearly shifted in a very direct manner. According to the May 20th print edition of GLOBE, Camilla Parker-Bowles has been gloating that she in fact will be Queen – sooner rather than later. It has been reported that Elizabeth was preparing to have Prince William bypass his father, Prince Charles, to ascend to the throne next, but as her health fails so does her ability to cope with the brutal palace in-fighting. Elizabeth knows that Charles is more laughing stock than fit to rule a country, but she no longer has the strength to fight with everyone.

Instead Elizabeth has shifted some of her focus towards slowly beginning to include Charles in duties fit for the next King. Just today accompanied Queen Elizabeth to the state Opening of Parliament, by far the most important event on the royal calendar, for the first time in 17 years. Charles and Camilla traveled to the event in their own horse drawn carriage ahead of the Queen. Clearly the expectation is that this time next year, Charles will be attending this even in place of his mother.

GLOBE has been telling us about the royal chaos for the past year and it seems that every bit of the inside track that they have been traveling is completely accurate. As Queen Elizabeth’s schedule has been planned out for this year it has been revealed that she will miss the The Commonwealth Heads of Government Meeting for the first time in 40 years! Instead Prince Charles will travel to Sri Lanka in her place in what is thought to be a clear indication that the changing of the guard is imminent. This is a major event for power players and the only viable reason for the Queen not to attend is that her fragile health will make it impossible.

As GLOBE has told you in the past, Camilla has all but thrown drunken temper tantrums over sitting on that throne. She wants to be Queen at any cost and truly believes that she deserves it. Queen Elizabeth has made it known in the past that she truly believes that Prince William and Kate Middleton would be a much better fit to rule her beloved country. William is a smart, solid and respected man. Plus he and Kate are younger and can easily relate to the people they would govern. So while Queen Elizabeth might not be in any shape to haggle, that doesn’t mean that Kate isn’t. She is quite close to Elizabeth and they share a mutual hatred of Camilla so don’t be too surprised if we learn in coming weeks that Kate is fighting on Elizabeth’s behalf.

Camilla has treated Kate horrendously so she knows best the evil that Camilla is capable of and the type of havoc that just one of her drunken fits can wreck.

Also inside the May 20th print edition of GLOBE you can get your fix of Hollywood news. This week a former aide to Doris Day is talking to the publication about the sunny star’s secret baby heartbreak. No other weekly magazine even begins to look at some of Hollywood’s legendary stars quite like GLOBE. Changing gears completely, if you’re a tennis fan then you’ll want to catch up with Jimmy Connors and hear what he has to say about Chris Evert.

I have to say, the May 20th print edition of GLOBE is even more jam packed with amazing reporting than usual. It has in depth coverage on the Royals, sports stars, Hollywood and don’t forget that GLOBE is also your go-to source for info on your favorite soaps! GLOBE deserves accolades for getting inside of this Royal power struggle made possible by the Queen’s failing health – and they were on it MONTHS AGO!  While other media outlets were completely stymied by the palace intrigue, GLOBE was accurately reporting the story. This is why I never stray from GLOBE as my source for what is really going on behind the scenes.  You can pick up your copy today!