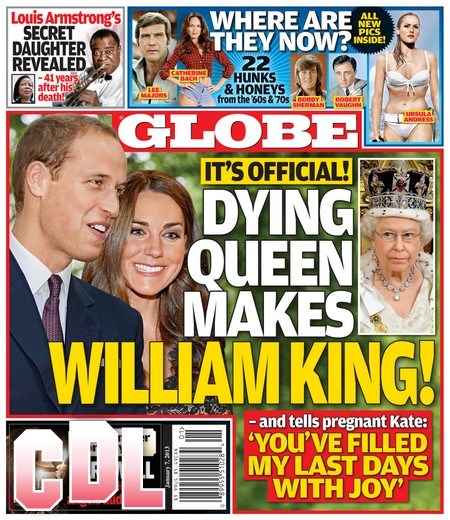 Dying Queen Elizabeth has made it official – Prince Charles is out and Prince William will be the next King!  GLOBE reports on the cover of the January 7th print edition that Queen Elizabeth has made her threatened decision to replace hapless Charles with popular William as heir to the British throne – and the decision is OFFICIAL!  No longer will Camilla Parker-Bowles’ attempts to influence the monarch to favor her husband be heard.  Elizabeth has made up her mind and it’s all thanks to Kate Middleton’s pregnancy and coming baby!

GLOBE reports that the Queen has told a proud Duchess of Cambridge “you’ve filled my last days with joy.”  Imagine how those words filled Kate’s heart own heart with joy.  Not only has Kate managed to get pregnant, albeit with the help of IVF treatments from the royal gynecologist, Dr. Alan Farthing, but she has completely check-mated her arch rival, Camilla Parker-Bowles.  Camilla has tried desperately to manipulate the Queen and gain favor ever since her step-son married commoner Kate.

Camilla destroyed Charles’ marriage to Princess Diana by conducting a long-term adulterous affair with the Prince.  This royal scandal remains etched forever in the Queen’s mind and she was only too happy to replace her son and his pushy wife with the far more popular William and Kate.   One might say that Kate’s pregnancy simply provides the perfect excuse for Elizabeth to ensure that cruel Camilla will never be Queen.

Now that GLOBE’s inside sources have learned that Elizabeth’s decision is made we can expect rage and fury from both bumbling Charles and callous Camilla.  The Prince stated recently that he couldn’t wait for his mom to pass away so that he could ascend the throne.  But now that Charles’ bid to be monarch has been dashed by Kate’s pregnancy we can expect the worst.  Kate and Will had best be on their guard – Camilla will stop at nothing to get the Queen to reverse her decision.

GLOBE also tells us that in this issue that Louis Armstrong’s secret daughter will be revealed 41 years after his death.  Looks like the gravel-voiced jazz star managed to keep busy!

We will be treated to an expose on 22 Hunks and Honeys from the ‘60s & ‘70s in this week’s GLOBE – where are they now!  Included in the list of super celebs are Lee Majors, Catherine Bach, Bobby Sherman, Robert Vaughn, and Ursula Andress!

Now that Queen Elizabeth has made the historic decision to flip the script on Charles and Camilla, replacing them with William and Kate, we are almost desperate to pick up our copy of this week’s GLOBE! I can’t wait to learn from GLOBE’s palace insiders exactly how this unprecedented manipulation of the monarchy is being received by senior royals.  Is it possible that Prince Charles will be driven to openly challenge his mother’s decision by greedy ambitious Camilla?  I know that GLOBE will steer me straight at the truth and guarantee that I stay right on top of the latest developments.  Without my GLOBE to keep me informed and entertained the Holiday season just wouldn’t be the same.