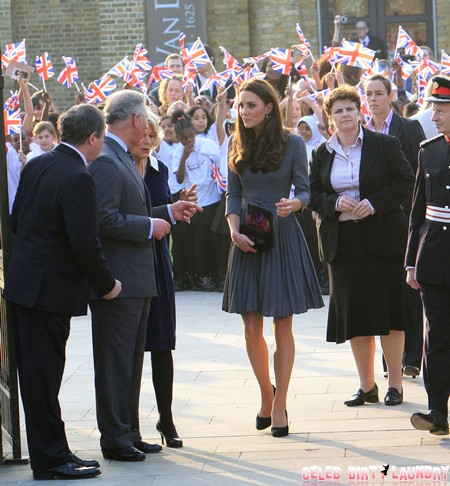 Camilla Parker-Bowles won’t leave Kate Middleton alone.  Camilla unveiled a sneak attack on The Duchess of Cambridge during a speech she gave while on tour of Australia with hapless Prince Charles.  Kate has a marvelous figure and this drives cruel Camilla further round the twist than the bitter boozer is already.  While it’s true that Kate has been accused of being too lean and starving herself for her royal wedding to Prince William, the timing of Camilla’s newest assault is especially poor.

As we reported here on Celeb Dirty Laundry, Queen Elizabeth has promised to make Prince William the next heir to the British Throne rather than his father, Prince Charles, if and only if Kate can get pregnant and produce a child. Furthermore, GLOBE has reported that palace insiders have heard that Elizabeth doesn’t want Camilla as Queen which has encouraged her decision to favor William over Charles.  The Queen is sick and tired of Camilla’s attacks on Kate as well as her drinking. This means that Kate would be the next Queen and not the ambitious adulteress Camilla!  So while Kate and Will are visiting the Royal Fertility Clinic, living on oysters, and searching the palace library for Fifty Shades of Grey, Charles has warned Camilla to sober up and shut up as he attempts to get back into his mom’s royally good graces.

But unfortunately for Charles, GLOBE has a report in this week’s November 26th print edition that shows that Camilla just can’t seem to get with the program.  Titled ‘Cruel Camilla’s Sneak Attack’ GLOBE explains how Camilla’s jealousy just won’t allow her to let up on Kate although her spite could cost her and Charles the throne.

Camilla has launched another vicious attack on Prince William’s beautiful wife, Kate. While touring Australia with hubby Prince Charles, Camilla took a swipe at her stunning but thin rival, telling teenage girls in Melbourne that they shouldn’t diet or it will catch up with them when they’re older.

The sharp-tongued shrew delivered the dig under the guise of warning young girls about the dangers of the brittle bone disease osteoporosis – one of her pet projects – but insiders say she was really skewering skinny Kate.

Camilla told her Melbourne audience, “the message I love to get over is to make young people aware of how important it is in their teenage years not to diet too strongly.”

A source says, “with photos of Kate plastered across magazines and TV everywhere in Australia, it was plain to see who was on Camilla’s mind.”

Camilla, 65 has been insanely jealous of pencil slim Kate, 30 since the day she was introduced to William stunning bride. “Camilla seizes on every chance to twist the knife indicates back,” a source says. “She didn’t mention it by name at the event, but it was so obvious she’d spotted another opportunity to belittle the newest Royal wife. She should be ashamed of herself, using a state visit to do it.”

The women are locked in a behind the scenes battle for the throne after dying Queen Elizabeth, 86 decided to make Kate and William her successors – if they have a baby. This outraged William’s out-of- touch 64-year-old father and his conniving second wife, who believe they are entitled to rule.

Back in Britain insiders say Kate, who appears to be the “picture of health,” was furious when she learned booze-loving Camilla was up to her dirty tricks again.

As Globe reported last week, Charles shipped his hard-drinking wife off to a retreat in Bangalore, India, under the guise of a week of rest and relaxation. But it was really a week of detox before their grueling three-week tour of pop on New Guinea, Australia and New Zealand.

“Charles realizes his train wreck wife was in no state to charm the Queen into reversing her historic decision about giving Kate and William the throne,” says the insider.

“That meant no more drinking and no more hate campaigning against Kate. This completely turned arose against her. But it seems Camilla just can’t help herself. She even snuck a glass of red wine while touring a local winery – and then ripped into Kate. She’ll stop at nothing to destroy her young rival.”

We wish Kate and William all the best in the quest to have a healthy baby.  It’s about time cheaters Charles and Camilla were relegated to secondary royal status – which is still more than they deserve.