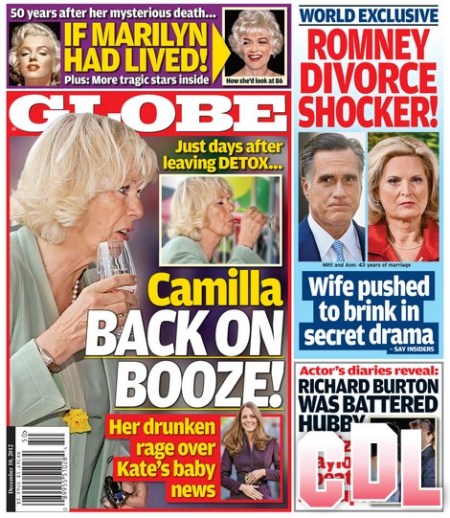 GLOBE brings us the breaking story from inside the Palace that Kate Middleton’s baby news has sent evil Camilla Parker-Bowles straight back on the booze!  As we reported at Celeb Dirty Laundry last week Kate has been receiving special fertility treatments from the royal gynecologist in preparation for a possible IVF induced pregnancy in hopes of a joyous Christmas baby announcement.  Both Camilla and Prince Charles are in a total panic over fears that Queen Elizabeth will make Prince William King of England, rather than his dad, if Kate gets pregnant and produces a royal heir.  So Kate’s recent aggressive pursuit of pregnancy and a baby has driven Prince Charles to outrageous public statements about being impatient for his mother to die and has spoiled Camilla’s alcohol detox program.

As GLOBE revealed, Camilla was sent to an intensive 7-day alcohol detox in Bangalore, India, under the guise of enjoying a holistic health spa retreat, after her drunken behavior threatened Charles’ influence with the Queen.  Recent polls show that Charles’ popularity has reached its nadir and Camilla is totally reviled.  This puts the Queen in the position where she is ready to break with protocol and choose to skip a generation on the Throne – leaving dim-witted Charles and ambitious Camilla totally out in the cold.  With Kate ready to announce her pregnancy any day now, her in-laws are desperate.

Her Majesty can barely tolerate adulterous Camilla as it is, given The Duchess of Cornwall’s endless efforts to humiliate and degrade Kate.  Now that Camilla has fallen right off the wagon, GLOBE reveals that the consequences of Camilla’s inebriation could be severe.  In the December 10th print edition, GLOBE’s inside sources expose Camilla’s plans to undermine Kate and William as well as to get Charles back in Elizabeth’s good books.  However, Camilla’s ugly agenda is being sabotaged by her own inability to stay sober – nobody takes a drunk seriously!

This week GLOBE features Mitt and Ann Romney’s Divorce Shocker.  It seems that the stately couple’s 43-year-old marriage has been pushed to the brink of disaster and is teetering on the edge of the abyss, according to insiders.  Could the stress of campaigning and then losing the election have poisoned their relationship?  Read the GLOBE on sale now to find out!

You’ll be as surprised as I was to learn that Sir Richard Burton was a battered husband and Dame Elizabeth Taylor was the dame doing the battering!  But that’s what Richard’s diaries reveal and we will read all about this sad discovery in this week’s GLOBE.

As if GLOBE didn’t already provide enough hot news for us, in this week’s edition they also go that extra mile and feature Marilyn Monroe as she would appeared today at 86.  Had she survived whatever it was that killed her, Marilyn would undoubtedly be very popular today.  With all the amazing modern cosmetic surgery procedures available expect a definite surprise awaiting you between the covers of GLOBE.

I never head home from work without my weekly copy of GLOBE.  There is no other publication that tells the unvarnished truth about the most important celebrities, stories and issues.  The insight and pure entertainment I enjoy from my GLOBE reading makes my day lighter and always gives me something positive to anticipate.