Prince Harry Has The Hots For Jennifer Lawrence – Best Couple Ever? 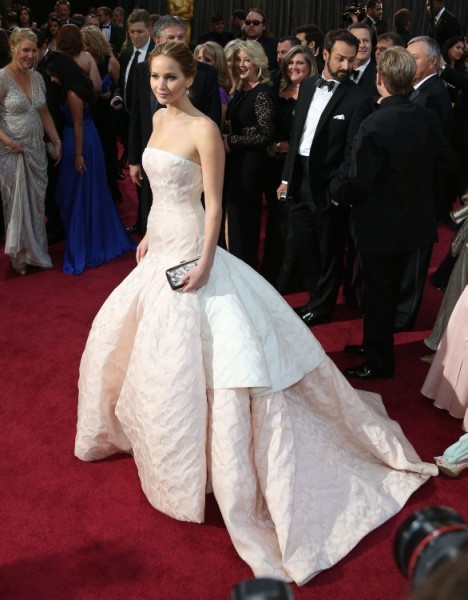 She did look like a princess in her Dior ballgown at the Oscars, didn’t she? And then she fell walking up the stairs, flicked off the media during her interviews and probably talked about farting somewhere in between. Yes, I’m behind this. Grace Kelly and Rainier III they are not but a Prince Harry/Jennifer Lawrence romance is a match made in heaven.

OK! magazine bless your heart. You done good with the creativity this week. According to the mag, Harry made a list of Hollywood starlets he wants to come visit him when he’s in NYC and Jennifer’s at the top. “Harry thinks Jennifer is a girl after his own heart — very chill and out for a good time. Harry is looking for a serious relationship and is ready to settle down. And the way he’s thinking right now he could end up with a Hollywood wife.”

Amazing, yes? Let’s not judge the reliability factor. Let’s just play along with the amazingness. We already know Jennifer has a thing for English dudes. She’s spent a lot of time in London and Harry loves blonds. And can you imagine her around Kate Middleton? It’s pure gold. She might even shame her into eating and working a little bit more. Talk about a breath of fresh air for the Windsors. All I can picture right now is Prince Philip. That old skeeze loves the ladies and an inappropriate joke and I can totally picture him flirting it up with her on those balconies and throwing in an ass pat or two. She’d liven everybody up! It would be great! And you know Harry would be all about her working. He’s the total house husband type who would rather be playing with kids than working the nine to five. A Hollywood actress is perfect for him. Why didn’t I see it before?

Would you be down with Prince Harry dating Jennifer Lawrence. He likes a girl that can challenge….