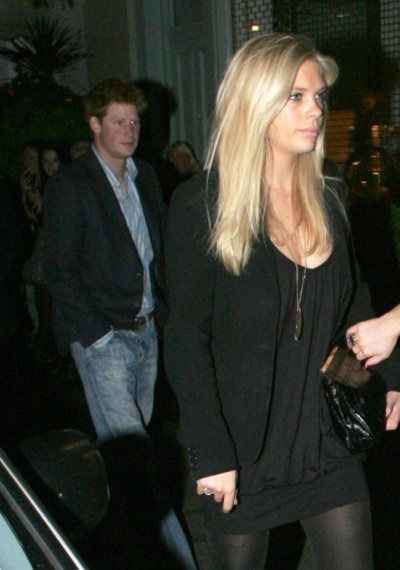 As many of you know I’m obsessed with a Prince Harry/Chelsy Davy reconciliation. Deep inside I live with the fact that, sooner or later, Chelsy will come to her senses and take the kid back. She laughs at girls like Cressida Bonas because she knows Harry’s just having fun until she snaps her fingers and he comes crawling. Unjust? Perhaps. But I’m OK with it because he’s screwed her over in the past so she kinda gets to treat him like shit as much as she likes now. It’s their thing.

Well this weekend was the society wedding of the year. Harry and Prince William were in Northumberland to celebrate their best friend, Thomas van Straubenzee’s nuptials with Melissa Percy. It was a big deal – probably second only to Kate Middleton’s in the royal set. Not much gossip is flying in yet but I’m waiting ever so patiently. This was the first time in a long time that Chelsy and Harry and Cressida have been at the same function at the same time (if ever?). And Chelsy and Harry were center stage because they both stood up with the bride and groom. I’m telling you – it’s fate! Their best friends are married. They are each other’s lobster!

Anyway, so some sources told the Daily Mail that Cressida was super nervous to be there because this was clearly Chelsy’s turf and she knows Harry still has a thing for her. How could he not? Look at the photos. She’s adorable and FUN and vivacious. She’s clearly a girl’s girl here and excited for her friend. She might also be trying to send a message to Harry that she’s totally happy without him but that’s OK too. The source went on to say that Harry and Chelsy have spent time together lately and he was seen leaving her house. I don’t know about any of that but I’m choosing to believe it. The only thing that makes me nervous is that Cressida hung with Princesses Beatrice and Eugenie at the wedding. Yes, they’re friends but would you be hanging with your on/off boyfriend’s cousins if you were currently off? Was she sending a message to Chelsy? I’d love to know how hard Chelsy laughs at Cressida’s messages.

You have to watch the video below. It’s so Downton Abbey! I love the fact that Pippa Middleton got virtually no cheers. I almost feel sad for her. And doesn’t it seem like Cressida is 14-year-old? She’s like a child out there with all the grown ups. And she can’t walk! How many times do we have to watch her fumble in heels? But Chelsy was glorious. Am I biased? Of course! But I know I am so that’s all right.

What do you think? Will Prince Harry dump Cressida officially now that Chelsy is around? It’s really no contest. I wish she would stop playing so hard to get though….