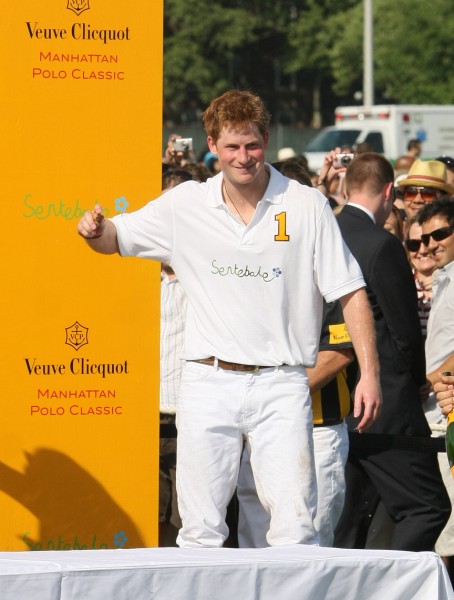 But this is why we love Prince Harry. He’s a cool dude. Don’t get me wrong. He’s a f-ck up of massive proportions and we’ve got many more years of f-ck ups to enjoy but it’s these little things that happen in the interim that make all of it A-OK in my book.

A couple nights ago Harry was out partying with his girlfriend, Cressida Bonas, at The Rum Kitchen when he got a pretty sweet offer he had to refuse. Fellow clubber, Vicenzo Ianniello, slipped the prince his number, and while Harry had to let him down, he did it gracefully in the most adorable way.

“I gave Prince Harry my number tonight, he promised he’ll call me if he changes his mind about women. Or men. #epicwin” Ianniello tweeted.

Super cute, right? First of all, Ianniello has balls. Good for him for trying. You couldn’t do that with William, right? I could see William just rolling his eyes and turning away but Harry’s game for anything. It’s what endears us to the douche. Thank God for his personality because if not he’d be a lost cause. He’d essentially be Prince Andrew.

So if Kate Middleton does manage to scare off little Cress Harry could start batting for the other side? It’s nice to know he’s keeping his options open. I wonder if this is why Harry gets off the hook time and time again with the royals. Does he scare them with “what ifs”? Like, “If you don’t let me marry the girl I want to I’m going to get caught making out with a dude in public!” Ya, I think that might be effective.

Can you imagine if he did come out as gay? Prince Harry wore a Nazi uniform in public for Christ’s sake so it wouldn’t be his biggest PR issue. But this is the royals we’re talking about! Still… it’s Harry. If anyone could take the royals into the 21st century and relax the old biases it’s him, right?