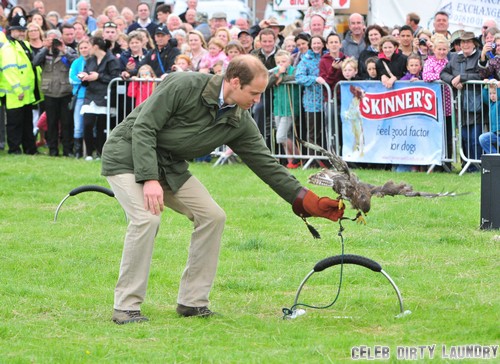 According to a new report from US Weekly, Prince William has revealed that he hopes to tour Australia and New Zealand with his new baby alongside him. Prince George is just a few weeks old, but his parents are already looking to their future. While they’re content at Kate Middleton‘s parents home in Bucklebury, they know that royal duties will spring up soon enough.

Anyway, the report states that when William and Kate go out on tour to Australia in 2014, they are planning to take George with them. Which means George will have his first vacation before he’s even a year old! Will reportedly stated, “We’re hoping to go there next year” and an insider added, “The trip is planned for Australia and New Zealand.”

Will also made his first public appearance at Anglesey since George’s first photo op outside the hospital, and he spoke about his wife and new baby, saying, “Catherine is sorry that she cannot be here today at the County Show. But she and George would have loved to have been here. He’s pretty loud but of course very good looking!” He also added, “I have to say that I thought Search and Rescue duties over Snowdonia were physically and mentally demanding, but looking after a three week-old baby is up there!”

Good to know he still has a sense of humor. Most new parents tend to lose their minds over the first few weeks, but then again, William is the future King.

What do you guys think of Will and Kate’s plans to take George to Australia on a tour? I can’t wait to see how cute the baby is when he grows up a little, and we should be getting an interrupted barrage of pictures once the tour stars.

Prince William plays with a falcon while visiting the Anglesey Show in Wales, on August 14