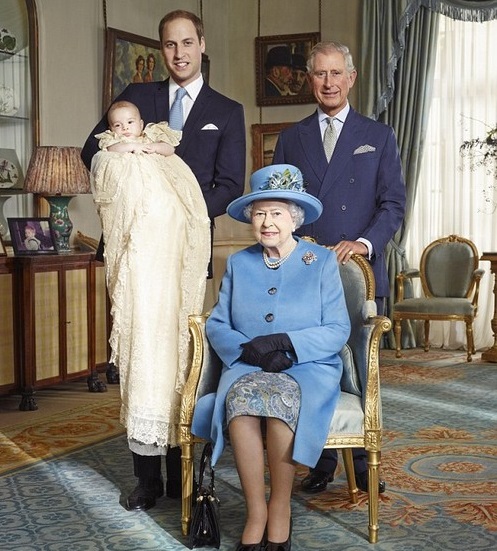 Prince William and Kate Middleton are trying their best to break centuries-old traditions in raising their new baby boy, Prince George. They want him to have some semblance of a normal life, without the constant media surveillance and attention that Will had to grow up with. But how does the rest of the royal family feel about that?

Well, first and foremost, Queen Elizabeth is ecstatic about her new great-grandson, even if her facial expressions don’t necessarily change. In her annual Christmas broadcast, the Queen spoke about the new addition to the royal family and claimed that it has allowed them to think of the future with a ‘renewed sense of happiness and hope’. She also added that life would ‘never be the same‘ for Kate and Will, as well as the rest of them. She spoke a bit about the royal christening, which she called a ‘happy occasion’, and we get some NEW behind-the-scenes footage from the official christening portraits. Awwww, look at George’s chubby little cheeks and grumpy face in the video.

Anyway, the Queen speaks at length about how the arrival of little George has changed their family, and although you get the sense that she’s all about preserving tradition, she does seem to understand that the future is constantly changing. In the end, she gives some advice to all parents, not just her own grandson and his wife. She explains that sometimes, a little change – whether in the form of a child or anything else – is exactly what you need to gain a little perspective. She explains, “We all need to get the balance right between action and reflection. With so many distractions, it is easy to forget to pause and take stock.”