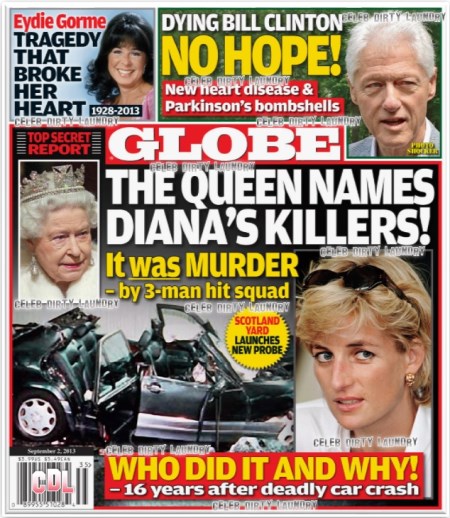 Just the fact that Scotland Yard even mentioned receiving new information in connection with the death 16 years ago of Princess Diana is huge. For years now conspiracy theories have abounded and things have been kept as quiet as possible or simply dismissed as just idle talk. This admission that there is something worth taking a closer look at is a monumental step towards at least publicly considering that maybe Henri Paul slamming into the tunnel wall in Paris wasn’t an accident.

As always GLOBE magazine is completely on top of everything related to the royal family and in the Sept. 2nd print edition they seem to have uncovered some damning information for a few members of Britain’s M15 or M16 security services. Queen Elizabeth reportedly knows exactly what happened on that fateful night and she has the names of the 3-man hit squad that succeeded in their fatal mission.

Both Diana’s chef and butler have both stated that in the months leading up to her death she was growing increasingly paranoid about what she believed was a plot to kill her. She constantly changed cell phones due to clicking sounds on the palace lines and she wrote her butler a letter telling him that she believed that Prince Charles was planning to kill her via a car crash. We really don’t know the truth and clearly some pieces to the puzzle have been left out over the years but Globe is certainly doing the footwork to present a likely picture of what exactly transpired here.

We have heard that Queen Elizabeth wants to place Prince William on the throne next, bypassing her son Charles. Perhaps there is something to this assassination theory and one of the reasons that the Queen doesn’t want her own son to rule is because she believes that he was somehow involved in having his former wife killed. You’ll need to check out the new GLOBE to begin to make some sense out of this for yourself.

Also in the Sept. 2nd print edition you can catch up on the latest about your favorite political players. Bill Clinton is rumored to be battling a deadly mix of heart disease and Parkinson’s disease. Is there any hope for the former president or has he been forced to make peace with the idea that his life is winding down?

GLOBE also reports on the tragedy that broke Edyie Gorme’s heart before she passed away last week. What could have had that affect on the wife of Steve Lawrence? Read this week’s edition to find out

Pick up the latest copy of GLOBE Magazine, the September 2nd print edition, to find out the details on all of these stories and more! Queen Elizabeth knows the truth about exactly what happened to Princess Diana – was she murdered and if so by whom and at whose behest? Only GLOBE has the inside sources and royal connections who can reveal the true story.  I’ve asked a friend to pick up and drop off my copy now – I’m not waiting until I finish work to get my GLOBE this week because I need to know the truth right now.