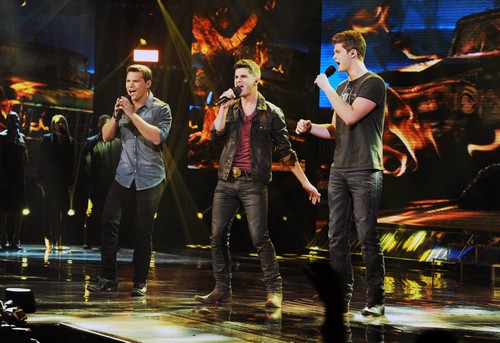 Restless Road took the stage tonight on THE X FACTOR USA for the first of the live performance shows. Restless Road sang “Easy Like Sunday Morning” by Lionel Richie.  Restless Road is on Simon Cowell’s group team and they decided to sing this song for their Motown choice. On tonight’s show the top 12 performed live in front of coaches Simon Cowell, Kelly Rowland, Demi Lovato and Paulina Rubio for America’s vote and to make it another week. Did you watch tonight’s performance show? We did and we recapped it here for you.

Judges comments: Demi says that Simon really knows a lot about Motown, she felt that she gave them a great song and they did a good job. Paulina says that they are so special and that the lead vocal was a bit peachy, but the song choice was great and they are cute together. Kelly says they are incredibly talented and was impressed with the tight harmony, but the leads got to be special. Simon says that their charisma and star power is perfect; he believes they will be in the finals.

Restless Road is comprised of Zach Beeken, Colton Pack, and Andrew Scholz. If you want to see the boys make it another week, you have to vote for them.