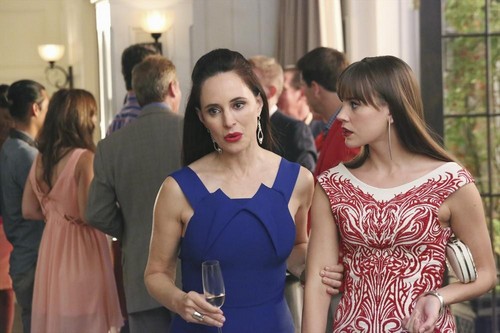 Tonight on ABC its hit drama REVENGE continues with a new episode called, “Resurgence.” On tonight’s show Emily sinks her teeth deeper into her plan.  Did you watch the last week’s season 3 episode 6?  If you want to catch up we did and we recapped it here for you!

On last week’s show roadblocks seemed to be mounting for Emily as Daniel’s attention was focused elsewhere, Grayson Manor may cease to exist, and two of the most important people in Emily’s life started turning on her – leading her to do something very uncharacteristic.

On tonight’s show Conrad hires famed party-girl turned PR mastermind Bizzy Preston (Ana Ortiz) to restore the Grayson family name, while Emily sinks her teeth deeper into her plan and Nolan has a revenge-agenda of his own.

Tonight’s Revenge season 3 episode 7 is going to be exciting, and you won’t want to miss. So be sure to tune in for our live coverage of Revenge — tonight at 9 PM EST!  While you wait for our recap, hit the comments and let us know how excited you are about the new season of the Revenge? Check out a sneak peek video of tonight’s episode [CLICK HERE]

Emily wasn’t kidding when she said she’ll be saying goodbye to her old life. Already she and Aiden are setting up preliminaries for her “death”. Towards the end she express her misgiving to Aiden. She’s never going to see Charlotte nor Nolan ever again.

Back to her persona, Emily ha to deal with a new problem. Conrad went and hired a publicist to rebrand the family image. The lady is pushy and she definitely knows what she wants. She wants to remove the mystery from Emily. To do that she wants Victoria and Emily to appear to be the best of friends. Victoria will go along with it because Conrad is using Patrick as leverage but Emily won’t.

Emily was discussing the problem with Nolan when he told her about his own dealings with Preston. The woman ousted him as gay just when he was reconciling with his father. Once that story was out; their rift reappeared and unfortunately lasted to the older man’s death. Nolan wants to take down Ms. PR just as much as Emily. Still where would they start. Emily suggests they feed Preston information on her first husband.

With all her focus on Preston, Daniel slips right under her radar. He’s taking it to making up to his ex in a big way. He wants his ex to make his wedding cake. He sees the awkwardness but he doesn’t. All he sees is that he’s involving her.

Victoria wanted to use Jack to break Emily and Daniel. That is until she spotted his interest in Margot. While he’s busy bettering the relationship between the US and the French; Aiden is still conveniently available. Victoria wants Aiden to seduce Emily away. She wants to stop the wedding no matter what. Aiden doesn’t know what to do. He can’t lose the Gracen connection and yet he can’t stop the wedding. Emily knows they have to hatch some kind of middle way for both her and Aiden to be seen together and at the same time keep Daniel.

Emily isn’t leaving anytime soon but she’s being missed. Nolan is getting sappy and Jack, who honestly thought he was over her, appears to be thinking only of her. Which is throws a wrench in his plans with Margot. You can only give a woman so many mix signals. Later, he told Nolan he couldn’t handle it. By which Nolan told him its time. Time to face his feelings.

Well, his feelings were more about saying goodbye to his wife the real Emily than saying farewell to Emily. He hadn’t let go of his marriage but now he’s ready. He removed his wedding ring as a sign to Margot. It left Margot able to give him another chance.

Sarah is going to make the wedding cake. Emily enjoyed the samples and saw no reason not to hire her. She’s not jealous and weirdly neither is Daniel. Aiden sniffing around Emily doesn’t faze him in the slightest. He can’t stop himself from looking for Sarah or at her. He almost kisses her during the real fireworks of the night.

Victoria overheard Aiden’s failure to rile Daniel but was lucky enough to have Charlotte give her the idea of Sarah. She tosses out Aiden despite of all his hard work helping her. It seems she can do this next part on her own.

Nolan and Emily found a way o get all of Preston’s secrets. The one she gets a lot of money to bury. If its revealed she’s untrustworthy then no one will touch after the scandal those two can create.

Margot had told Conrad that she wasn’t interested in helping to rebrand him. That’s not what sells. It got Conrad thinking on what does. He’s going to write a memoir. How much is he willing to reveal in order to gain back popularity? Margot hears the idea floating around and she wants a part of it. She knows a story is there and that’s exactly what she told Jack.

Nolan won’t reveal Preston’s clients’ secrets. He’s merely going to hold it over her head to blackmail her. Nothing cruel. He only “requests” she end her affair and be good to a man he saw obviously loved her. His takedown tend to have a silver lining.

Victoria makes a pitch to Sarah the same time Nolan informs Emily that her fiancée has a wondering eye. Talk about the same page…