Rihanna, Chris Brown To Perform Together At Grammys – Inappropriate Or Old News? 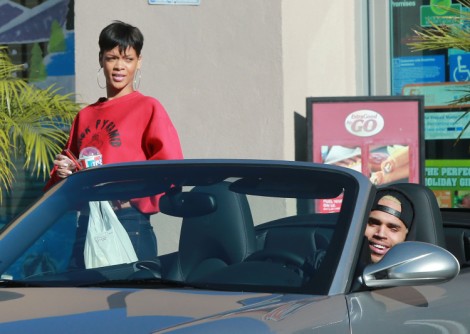 I get it. You’re young and in love and together again and you don’t want to hide it anymore. You’re sick of apologizing and just want to move on without being ostracized every time you go out in public. Fine. Whatever. But there’s a big difference between officially coming out as a new couple and flaunting it in front of the music world, isn’t there?

Let’s bear in mind that this information is coming courtesy of HollywoodLife so… it’s probably less than right on but we’ll go with it anyway. There are reports circulating that Rihanna and Chris Brown are not only attending the 2013 Grammy Awards tonight but are also performing together. Naturally, the song in question in Nobody’s Business. Fitting, yes? So basically the attention-loving couple is saying “Screw you. We don’t care what you think. We’re back together and making sweet, sweet music. Mind your own business! (but please watch us on stage while we do it and then go out and buy our music!). Hypocritical? I don’t know… this is Rihanna and Chris Brown. Irony is most likely lost.

Will there be backlash or is this old news? Haven’t they performed together before since the infamous beat down? For some reason I think they have. There were detractors then and I’m sure there will be detractors now. Obviously the song choice doesn’t help but… again, it’s Rihanna and Chris Brown. Did you expect anything less? I have no idea why she went back to the douche but she did so I’ve moved on. It would probably be in better taste to live under the radar for a little while longer before making this grand statement but we’ll just have to see how the public takes it. I’ve got to think people are tired of the whole Chris Brown/Rihanna grammys drama by now but you never know with these two. They manage to keep shocking us!

Are you surprised the couple will reportedly sing Nobody’s Business? Rihanna and Chris Brown are obviously making a statement, right? What do you think it is and do you think people care anymore?