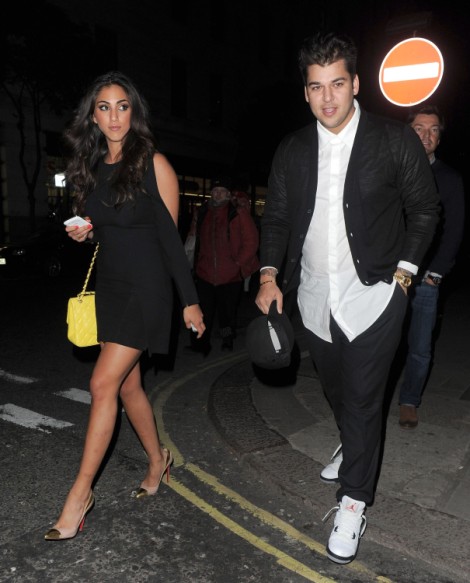 Can we talk about Kris Jenner first? Rob Kardashian was reportedly out on a date last night in London and his mother had to tag along. Not only that but she kept a dude on her arm too. Poor Bruce but he knew what he was getting himself in to. Doesn’t it look like Kris stepped out of the Rhythm Nation video? And she looks 30 years old! I’m not sure if that is a compliment or not. I guess it is. Whoever she’s going to is doing a damn fine job. Why can’t Kim Kardashian get that kind of work done without looking all cat-like and waxy all the time. I’ve said it before and I’ll say it again – Kris Jenner is actually the prettiest Kardashian. Kim will NOT age as well.

OK, I got that out of my system, now onto Rob. The Daily Mail reports he spent last night at Nobu restaurant in Mayfair, London with the mystery brunette above. Good for him for getting a date I suppose (although it looks like it was orchestrated by Kris). But does anyone else think it’s a tad creepy that chick looks like his sisters – Kourtney Kardashian especially? She’s obviously trying. She’s got the tight, cheap black dress, the dark hair and over-tanned skin. She’s cute but I bet she’d be so much cuter without all the war paint on (same goes for Kim. She’s so much better looking without all those fake eyelashes!).

But clearly Rob Kardashian’s weight isn’t holding him back. He’s been on this diet crusade ever since he ballooned up (again, could have been orchestrated by Kris). I’m of a mind to say good for Rob for getting any girl, let alone a Kardashian look-alike. He’s kind of a bitch when it comes to the girls but I also think he’s kinda a bitch when it comes to anything. Whatever happened to law school? I had respect for him for a brief second when he announced that news. I guess Kris didn’t orchestrate that which is probably why it’s never going to happen.