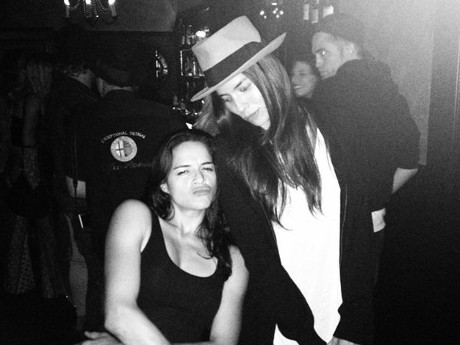 Robert Pattinson might’ve called it off with his once-forever-love Kristen Stewart, but reports are saying that he might be admiring a new lady, and her name’s Michelle Rodriguez! A little Fast and the Furious anyone? According to reports, Robert was seen out and about at the ever popular Chateau Marmont alongside an artsy group of people, including Michelle, actor Simon Pegg, and photographer Tasya van Ree.

The tight group of friends was spotted by several party goers and one helpful lady (Twitter user Brianna Morelli) tweeted a few observations. “To all Robert Pattinson fandom yes it was at Chateau & yes he was dining w/ friends & Michelle eventually joined them.”

Michelle and Robert supposedly shared a very intimate cigarette break and appeared to have a wonderful time together. But just how good of a time did they have? Do you think they’re going to get together — are together? Brianna also couldn’t help but comment on Robert’s attire: “Oh michelle rodriguez and robert pattinson are here sup buddies but damn let me tell u that piece of white chocolate can rock a beanie.”

Tasya snapped the above photo and put it on the web. Everyone seemed to have a rocking time. Stay tuned for more developments in Robert Pattinson’s Quest for Love!