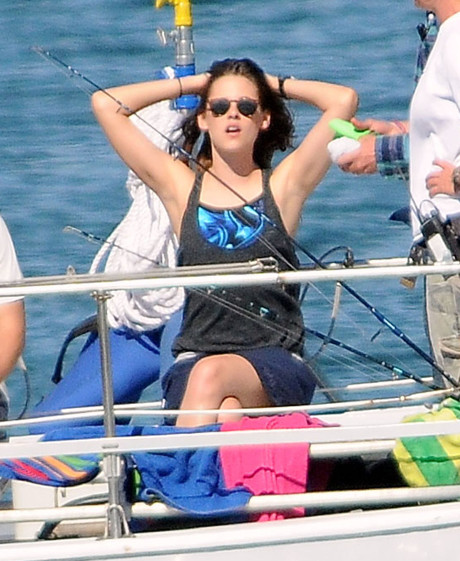 Kristen Stewart and Robert Pattinson are turning into a modern day version of Dumb and Dumber. The two Twilight stars have had a more tumultuous relationship than Kirstie Alley’s weight romance. According to insiders, the two have rekindled their love for one another while sitting around a campfire singing Wham songs.

They are allegedly sneaking around kissing one another under pine trees and preparing to “share their love with the world.” This soppy love fest turned into Meryl Streep on Oscar night when the actress apparently revealed that it feels as if she and Rob are “doing something wrong”.

The only thing they ever did wrong was the Twilight trilogy. No human being should have been subjected to those wannabe vampires and their glitter bombs! It was like Ke$ha after Mardi Gras. A friend said this about the whole affair:

“Kristen doesn’t want to keep her relationship with Rob a secret anymore. She doesn’t want to have to sneak around whenever she sees Rob — it makes her feel like she’s doing something wrong and she’s not. Kristen wants to go public with her relationship with Rob. She wants to go to concerts and other places with him, like they used to. Rob on the other hand, is being a lot more cautious and isn’t ready to have everyone know his business when it comes to who he’s dating.”

What? And brains broke across the nation. There’s no Twilight lined up – thank God – so if these two get together again it won’t affect our little Twilight hearts or our secret Taylor Lautner shrines. They’ll just be another Hollywood couple again.

But I swear, if a Twilight spin-off or any other vampire movie is released with these two as the leads, I will blame Demi Moore and Iceland. Go away!