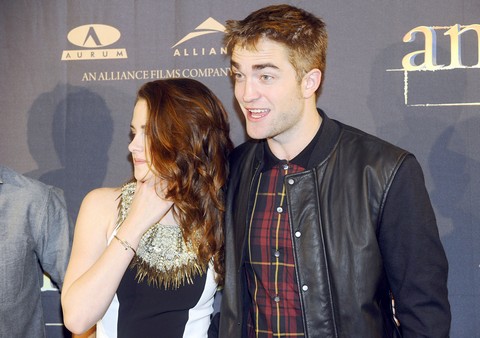 The fact that Robert Pattinson and Kristen Stewart celebrated Christmas on different continents didn’t escape our notice, and we’ve reported that they canceled their plans after a huge argument, leaving Rob to fly to London alone. Though the two haven’t officially split since their fall reunion after Kristen’s affair, it’s no secret that their relationship is on the rocks, big time! Rob seems to be fading out of the acting world, as his last few movies have bombed in the box office, and his only ties to Hollywood are his now obsolete vampire alter ego, and his cheating, mopey girlfriend! But as an unhappy New Year dawns, will Rob finally say that enough is enough, call it quit, and disappear into the English countryside?

Rob’s friend chatted with Life & Style, print edition January 21, 2013, about his relationship. “Rob isn’t happy, the pal said. “It’s just a matter of time before he ends this.” The pair certainly don’t look happy, if photographic evidence is to be considered. The once flirty, all-smiles couple tend to spend their time nowadays walking several paces apart with gloomy facial expressions. It isn’t symptomatic of a well adjusted romance! The pal continued that “things with them aren’t good,” especially since their pre-Christmas fight, the tipping point of which was Kristen’s unscheduled plans to include her mother in Rob’s family holiday. But that was the tip of the iceberg!

“They’ve been fighting a lot,” the friend confides. It seems like Rob is clinging on to Kristen to save his acting career, but is really just damaging his reputation! The guy comes off as a naïve pushover, despite his hasty separation from Kristen last summer after she cheated. If he wants to grow from this, he needs to dump her and move on. We’ve heard that he wants to focus on work behind the camera, and being tied up to the biggest joke in Hollywood won’t help him there! Do you sense a Rob and Kristen split in 2013?