Robert Pattinson And Sarah Gadon Getting Closer On Set, Should Kristen Stewart Be Worried? 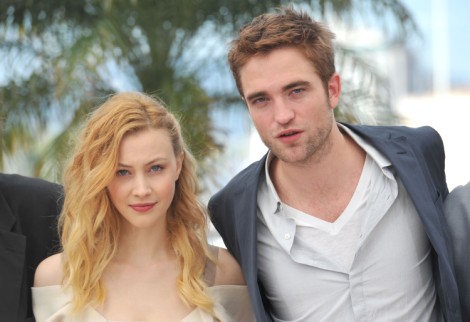 This is a little disappointing to me. Not because I’m Robsten FOREVER but because she doesn’t seem his type. I actually liked the Riley Keough connection. She made sense because she also wore that “Don’t f-ck with me. Don’t you know I’m a badass?” expression all the time similar to Kristen Stewart. She’s basically Kristen 2.0 and a lot of fun gossip can come out of that. But Sarah Gadon? Who the hell is Sarah Gadon?

Well, we are about to find out. I just checked out her IMDB page and she’s got like 100 movies coming out this year and then I realized I’ve seen her in a couple things – mostly David Cronenberg movies. That’s where she and Robert Pattinson are supposedly “bonding” right now on the set of the new Cronenberg film, Map to the Stars.

Here’s what a source told The Mirror: “The pair are filming out in Toronto and they have an obvious chemistry. They laugh a lot. But they are also very serious about their work and have been discussing their roles and rehearsing loads together, one on one…. Rob is in no hurry to get a new girlfriend, though, so officially he and Sarah are still very much just friends – but it’s definitely a case of watch this space.”

I suppose we should just get used to this. From here on out Rob and Kristen will be linked to whoever they’re working with. It doesn’t help that they both have a history of dating whoever they are working with. But if you were Kristen, who would you rather Rob be rebounding with – Riley or Sarah? I’d have to say Riley. Kristen can handle Riley but Sarah is a wild card. She’s on the upswing, super beautiful, and poised to jump into the limelight this year. So who else thinks the source on this Robert Pattinson and Sarah Gadon story was Sarah’s publicist? What better way to break onto the public’s radar right now then by creating a faux relationship with Robert Pattinson?