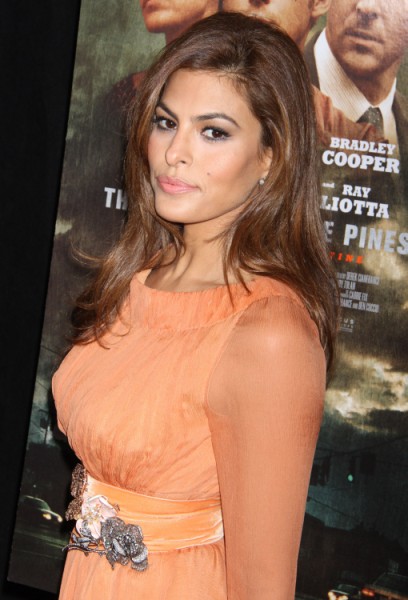 Ryan Gosling and Eva Mendes are exhibiting some interesting behavior. How interesting? I’m not really sure since you don’t hear about them too often. But I read this story in Page Six and I thought we had to discuss it. It’s about Ryan Gosling’s love life so I know there’s an active audience and a potential Ryan Gosling/Eva Mendes break up story is always big news for all the fan girls out there.

Apparently Ryan flipped out at a photographer over the weekend when the photog called Eva “baby.” He was obviously trying to get the couple’s attention as they were entering the Bowery Hotel Friday night and screamed “Hey, baby!”. Ryan freaked and confronted the guy saying, “Who you calling baby?” Eventually Eva calmed him down and the dudes settled it and moved on. You just got goosebumps, right? So chivalrous. I can’t even contain myself. But a bit over-the-top too. Why so short-tempered? I’m sure paparazzi scream inappropriate stuff all the time. Just saying….

Then later on Eva and Ryan attended a party for their movie, The Place Beyond the Pines but Ryan took his mom for his date instead of Eva. He does this a lot. It’s not a big deal. Eva showed up 45 minutes later but they stayed apart most of the night and left at different times. “I didn’t see Eva and Ryan interact once,” a source said. “They stayed at opposite ends of the room from one another.” I get wanting to keep you romance low-key but that’s weird, right? I wonder if his mom talked to her. They’re supposed to be tight.

So the question needs to be asked – is the pressure getting to the couple? There have been all these rumors circulating lately that Eva’s super insecure ever since Rachel McAdams came on the market again. She supposedly also embarrassed of her career and hunting for an Oscar project. I don’t know if any of this nonsense is true but, I’ve said it before, it must be difficult dating someone when public opinion doesn’t want you to. Hopefully she doesn’t read the tabloids. But would it kill her to smile? Check out the photos of the The Place Beyond the Pines red carpet last weekend. We can talk about her hideous dress another time, I don’t have the energy, but does she always have to look pissed off? We get it. It’s your sultry look but lighten the f-ck up! People might warm up to you if you appeared warm. Just a suggestion.

So is a Ryan Gosling/Eva Mendes split imminent? Are you sensing tension? I think I might be.