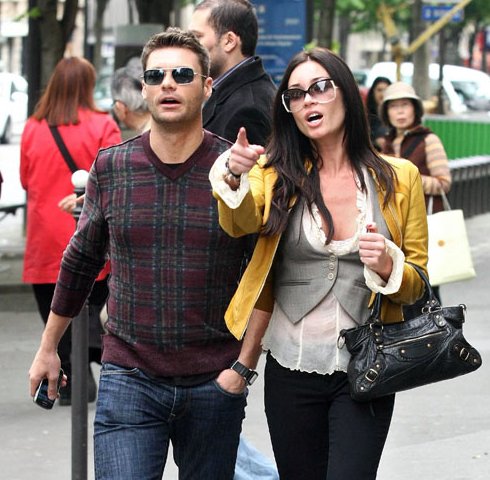 It has only been a few weeks since Ryan Seacrest and Julianne Hough confirmed to the press that their three-year relationship had ended. Supposedly Jules got sick and tired of waiting for Ryan to propose, or at least take another step to prove that their relationship was inching towards something permanent. I have to say I’m kind of shocked to hear that Ryan has been spotted out with his former galpal, Jasmine Waltz.

Apparently, according to the April 22nd print edition of Star Magazine, the two recently reunited. Supposedly Ryan was open to the idea because he thought Jasmine simply wants to have fun and spend time together. She, on the other hand, seems to see it quite differently. Sources close to Jasmine say that she dropped Michael Phelps after a hot weekend in Vegas because Ryan called her. She sees this as an opportunity to bag the media mogul once and for all. She purposely remained friendly with Ryan even after he got together with Jules, so that if he became single she’d be first in line to make a move towards him.

As for Julianne, she’s probably none too happy right now. She believed that Jasmine was never a threat to her relationship with Ryan so seeing that there was actually an ulterior motive isn’t likely to sit well. Do you think that Ryan will cut ties with Jasmine again once he realizes that they are most definitely not on the same page? I’m kind of surprised that he was the first to appear with a new date, considering how busy Ryan is. I actually figured we would see Jules turn up with a new guy first!

Is there any chance that Ryan and Jules will reconcile? Tell us your thoughts in the comments below!