Sandra Bullock Supports Michael Oher At The Super Bowl: A ‘Blind Side’ Reunion 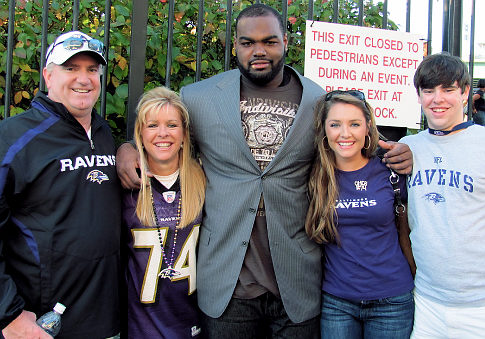 Sandra Bullock will be by Michael Oher’s side as she supports him at tomorrow’s Super Bowl, cheering on for the Ravens to win. The two have a little history – Sandra played his adoptive mother in 2009’s The Blind Side (which required her to have several meetings with Oher’s family to get into the storyline of the movie).

Bullock has proven to be a very supportive woman of Michael’s projects; this is not the first time that she has attended one of his games, in fact, Bullock and Oher have remained close friends since they first met back in ’09. Isn’t that adorable? We’re guessing that the actress just wants to show her support to Michael and the team take on the 49ers.

OhNoTheyDidn’t reveals that Michael’s mom made the announcement earlier this week: “Oher’s mother Leigh Anne Tuohy has confirmed that Sandra Bullock, who won an Oscar for her portrayal as the Tuohy matriarch on the big screen in 2009′ The Blind Side, will be attending the upcoming Super Bowl in New Orleans.”

“Yes, [Bullock] will be donning her 74 jersey on Sunday and cheering for the Ravens,” Leigh Anne told EntertainmentTonight. The Baltimore Ravens will go head-to-head against the San Francisco 49ers at the Super Bowl, airing on CBS, this Sunday with a special lipsynced performance by Beyonce Knowles.