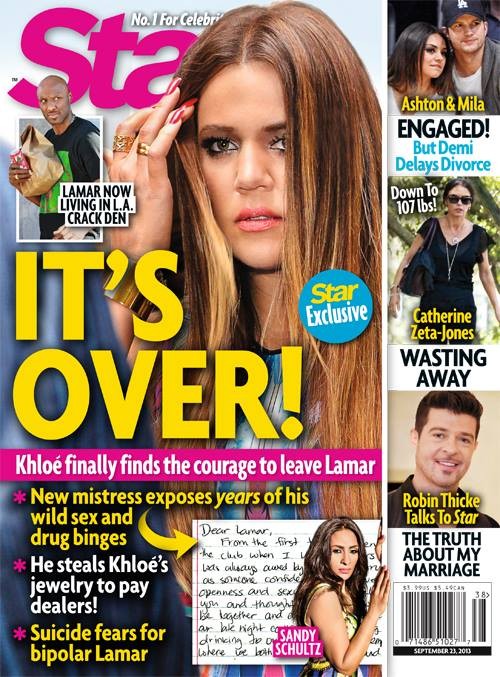 You didn’t think that the trail of mistresses willing to talk about their relationship with Lamar Odom would end at just two ladies dishing details, did you? I hope not because here comes mistress number three ready to tell the world about her ten year dalliance with Khloe Kardashian’s husband. According to the Sept. 23rd print edition of Star Magazine, Sandy Shultz met Lamar at Studio One in West Hollywood back in 2003 and spent three years dating solidly. They all but lived together until 2006 when Sandy left the country for about a year.

Upon her return in 2007 Sandy and Lamar reconnected and got back together almost immediately. They were still together back in 2009 when Lamar first met Khloe. In fact Sandy was Lamar’s date at the party where he met his future wife and she was absolutely stunned to hear that her man was going to marry Khloe a few weeks after meeting.

Sandy maintains that she has met up with Lamar on numerous occasions since he married Khloe and that Khloe actually began her relationship as Lamar’s side dish, not his true love. This is just another example of how if you begin as the other woman, you end up dealing with other, other women later on.

While Lamar likes to write off these women as groupie whores, I have to wonder if he’ll have the same reaction to Sandy because they have a ten year bond of some sort! This chick knows Lamar way better than Khloe ever did! It sounds like Khloe actually moved in on her man in the very beginning and Lamar hopped on board that Kardashian gravy train with little regard to the woman that he had been involved with for years.

Do you think that Khloe knew that Lamar and Sandy were still connected? Is this another nail in the coffin for their marriage? Tell us your thoughts in the comments below!