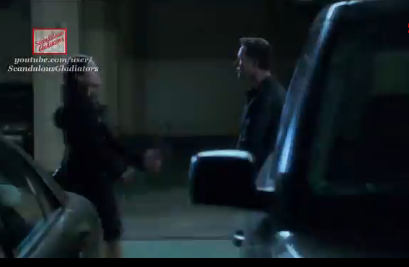 The new video preview shows us highlights from the first half of the season stating they they have pushed the limits all season long.  After tonight’s amazing episode, on Feb 27, 2014 it rises to a whole new level of crazy. Mellie Grant the First Lady and Olivia Pope have a sit down and Mellie tells Olivia in a very sarcastic voice to smile because, “the world is watching,” the camera pans on to the window where photographers are snapping pics.

On another note we can discuss Quinn and Huck. Yes, we all know Scandal can be more secretive than the actual NSA at this point but two of the stars of the show are willing to risk the wrath of Shonda Rhimes in order to help us from literally going insane with anticipation.

Together, both Huck (Guillermo Diaz) and Quinn (played by Katie Lowes) sat down for an interview to discuss where their characters could possibly go from last week. In case you missed you missed last week’s episode; you can get up to date here!

The audience got to witness a whole new side to Huck and it could have been more than we ever wanted to see. Last week Huck converted the once shy and awkward Quinn into being his double agent but in order to do so he had to hurt her. And it wasn’t no “Indian burn” either. He took enjoyment in the pain of same person that did her best to always be there for him. I’m sure she’s still hurting from it. Both physically and mentally! Yet where will these former partner in crimes go from here.

Guillermo helped put at least one question to rest. He told HITFIX, he doesn’t believe Huck will ever want to kill Quinn. I say “really!?!?” because he sure looked disturbingly happy last week during the torture scene. It might have been the happiest we’ve ever seen him and that’s saying a lot. But as Katie explains Huck took enjoyment for paying her back. She did after all betray him and all that he tried to teach her. It’s hard for anyone to get over a knife to the back. It could almost be too hard… more torture hasn’t exactly been removed off the table just yet.

“Huckleberry Quinn” could be over. Neither of the stars know if their characters will be able to work together after such a shift in their relationship. It will be safe to say that friendship will switch gears into business dealings only.

Huck blames himself for Quinn. He was the one that invited her into his world. He’s going to feel like he should have seen this coming. She was a girl without a family and so very eager to please. Susceptible is the best word to describe Quinn because she’s going to want to find some she can connect with. Let’s hope she won’t fall in with Charlie again. Despite what Huck wants, he won’t allow her to betray him ever again.