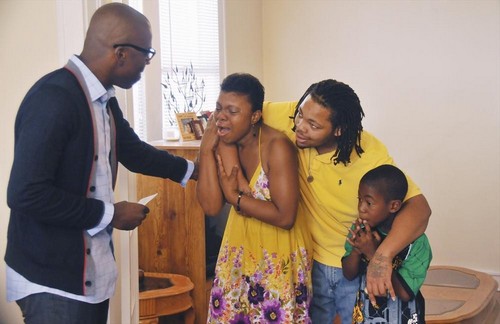 SECRET MILLIONAIRE returns to ABC tonight with a whole new episode called, “Amos Winbush: New Orleans, LA.” On tonight’s Amos Winbush III, founder of a multi-million dollar technology firm, returns home to Louisiana for the first time since Hurricane Katrina. Did you watch last week’s episode with business owner Debbie Johnston? If you missed it we have a full and detailed recap here for you.

On last week’s show it was the tale of two Richmonds as healthcare industry self-made millionaire Debbie Johnston left her home in Richmond, Virginia for the impoverished and crime-stricken streets of Richmond, California with a mission to find deserving people and organizations in need.

On tonight’s show it was 2005 when Hurricane Katrina hit Louisiana and the Mississippi Gulf Coast, leaving a wake of destruction in her path. With so many local residents still recovering from the storm, Amos Winbush III travels back to his home state with a mission to find deserving people and organizations in need. During his week-long visit, he meets a number of grass-roots organizations that touch and move him in amazing ways.

They including: St. Paul’s Homecoming Center, a non-profit that is dedicated to restoring and rebuilding the homes of displaced residents; Hope United Church & Community Center; and A’s and Aces, a program that works with children and focuses on improving literacy, teaching positive behavior and citizenship all while promoting healthy living through the game of tennis. Amos also meets some strong and determined local residents who change his life in a number of ways. After a week of getting to know these people and organizations, he shares the surprise of a lifetime.

Tonight’s episode 2 looks like it going to be great and you won’t want to miss it. So be sure to tune in for our live coverage of ABC’s Secret Millionaire episode 4 — tonight at 8PM EST!

RECAP: Founder of multi-million dollar technology company is going to leave his identity behind for six days. Amos Winbush III is married to Tiffany and they live near Wall street; he enjoys life and the way he lives now is different than the way he grew up. His mother sacrificed so much and worked two jobs to support their family. His destination is New Orleans, Louisiana and the place is still devastated by Hurricane Katrina. He arrives in his room and receives $30.50 which is the average amount that someone would receive on welfare. He finds a roach in the room and is disgusted. He decides to clean the place to make at least temporarily livable.

He drives around and finds that every road looks like a grave yard. His story is that he is doing a documentary. He heads to St. Pauls that is a hub for Katrina recovery. Amos gets a tour around by Connie and she says that she is not willing to see New Orleans die. Today Amos is going to help a man named Joe who is a builder himself and he has fallen on hard times. Joe puts Amos right to work and it’s the first time that he has ever used a power tool.

Joe tells Amos that without Connie’s assistance he wouldn’t be able to do as much as he does. He also shares with Amos that friends drowned in the hurricane, some where his neighbors. Amos is so affected by Joe’s story that he wants to tell him who is but knows that he can’t.

Amos next visits A’s & Aces run by David Schnumaker that teaches children tennis and life lessons. Amos goes to visit some kids that are playing tennis and realizes that there is a need for these types of things for children. Amos meets Quincy, a little boy that is in the program and thinks he is a really cool kid. Amos then meets Kalanthia who is there to pick up Quincy and tells Amos that he loves being in the program.

Amos next is heading to Hope United Church to help dig in some trees for the neighborhood with Connie. Amos then heads inside to help paint the inside of the church. Then he works in the rain in a big hole to help revitalize the community. Amos finds out from the pastor the enormity of the loss caused by hurricane Katrina.

Amos is crossing the bridge now just before nightfall and he is surprised that the stamps are still on the houses and he drives further to where the levy was breached.

Amos continues to walk around the city and helps people, he is heading back to A’s & Aces to see the classroom side of the organization. Eighty percent of New Orleans schools were shut down after the hurricane. Amos walks in and greets the children. He sees Quincy again who says to him that he was wondering where he was, Amos was so touched. Quincy invites Amos to dinner with his mom and her oldest son, Burgess. In 2005 Kalanthia was working as a nurse, it was a Saturday when it all started, she went to work on Sunday anyway and their first level was flooded. She had to worry about the patients and get them to helicopters as fast as possible, it felt like a war zone. Her phone was dead, she didn’t have a charger, she didn’t see them for two weeks; but she always had faith.

Amos goes to visit Connie and a lot of people in her organization, he tells her that her story is rewarding and he has not been honest. He is a millionaire, he presents them with a very small token of his heart and donation of $40,000.00 to do anything that they want to with St. Pauls Parish. He then tells Pastor Nick that the work he does is phenomenal, he gives him a cheque for $20,000.00.

Amos then heads over to see Joe, who thinks Amos is there to work. Amos tells Joe that he is an amazing guy and did more than he could ever know. Amos tells Joe the truth, he is a millionaire and because Joe has touched him so much he is giving him a cheque for $30,000.00. Joe starts crying and the two hug.

Amos is now heading over to see A’s & Aces, he goes to see David and thanks him for letting him volunteer. Then Amos tells David the truth, he is a millionaire. Amos give him a lease agreement for space to play tennis so the children can play worry free for two years.

The last stop is over at Quincy’s house, he tells them the truth as well and calls Quincy amazing, he gives them a cheque for $10,000.00.