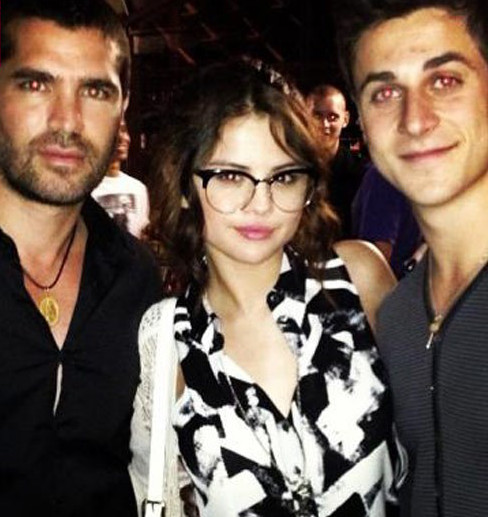 Selena Gomez and David Henrie used to work together on the Disney set of Wizards of Waverly Place, and now their relationship seems to be going from friends to, perhaps, something more than that. Are these two former wizards conjuring a new type of magic? A little bit of love? If this is the case, then we’d like to take a moment to express our gratefulness.

Selena, for her own sake, really needs to forget about her ex Justin Bieber and move on. Chances are SelGo and David are just really close pals who like to have lunch together and hang out together (that is okay to do, you know), but lots of people are throwing their arms up in the air and already hoping they marry.

Selena and David’s first alleged date was a trip out to get some lunch — spotted here. Now, the couple was spotted visiting a friend at what looks to be a party or get together of some sort. David stands close by Selena’s side. While they’re not doing anything that would necessarily suggest a hot new romance, maybe they’re just trying to be super sly actors and cover up their mad hot love for one another.

Not only does Selena seem to be moving on from her past relationship but Justin seems to be as well. Apparently he’s been seeing new girls and doing his Bieber wanabe-gangsta-thing, so we’re glad Selena’s having a bit of fun as well. Several days ago, she supposedly went out to karaoke with her friends. We imagine things to only get better for Selena, and maybe those future plans will involve David Henrie as well? Who knows. One thing’s for sure . . . . Dating Selena Gomez would definitely be good for David’s career. Just saying.

You tell us: Are Selena Gomez & David Henrie dating?