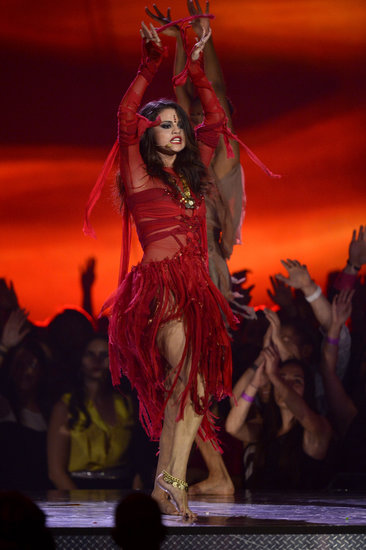 Selena Gomez’s new song “Come & Get it” is a cross of Bollywood and pop music. The beat could’ve been a great if the singer’s soft and untalented child’s voice hadn’t been use for both the performance much less the actual track. For those who need a refresher, Selena recently debuted the song at the MTV Awards.

When the lyrics were published many people at first thought the song was about Justin and their relationship however in actuality the song was written for Rihanna. An adult woman with strong vocals; I can see her doing justice to the song. Yet those lyrics about getting back with your ex would have made everyone think it was an ode to Chris Brown. Who knows, Selena’s new song might just be about the infamous woman beater.

Her bit, an attempt at Britney’s “I’m a Slave 4 U” performance, made me cringe as if I was watching something illegal and that I should be arrested. It looked like a cross of Britney and Cheetah Girls. Selena who once had a girl-next-door vibe, has been on a try hard mission to sexy up her lackluster image. But everyone knows what this is all about. We get it, you’re over Justin, but pull back on the whole prositit-tot stunts. Despite her fans’ opinions, she is not the new princess of pop.

Even though I could be considered harsh for denouncing her song, there’s no need to jump on her bandwagon just because I refuse to listen to her crap. Other people agree. Her pop/auto tune music before this was much better. Hell, with many taking to Twitter, the jury is still out whether her last performance was or was not culturally insensitive. When Nelly Furtado does it, it’s fine, but not when the Latina and mostly Caucasian back up dancers give Bollywood a try.

If she puts that bindi on one more damn time, she’ll take the focus off my Derek Hough. Why does Dancing With the Stars book these people. Name one song of hers that a dance sequence could easily fit with. She can’t sing the song slow, people will hear her sub-par voice. If she sings fast then dancers would look like they’re having a seizure. Nevertheless all jokes aside, does this show honestly look like the platform for Selena’s fans? I don’t see the preteen crowd tuning in for DWTS. Matter of fact I don’t even see a manager doing this to their client.

No one has appeared to be coming off “the breakup” unscathed. Justin Bieber became a wannabe gangsta douche and Selena just can’t get a single step right. Just look at it, everything this once power duo touches post breakup has been nothing but over-hyped crap. People have been coming down hard on Justin but then Selena gets off lightly. That’s got to stop. She made a song about Chris Brown even more offensive – Rihanna singing “when ur ready, come and get it.” Hello Titanic, meet the iceberg otherwise known as “Come and Get it”.