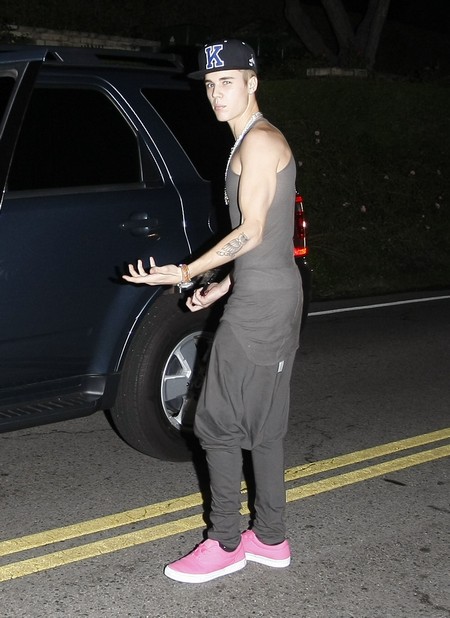 Justin Bieber has been caught  on camera smoking a marijuana joint.  Justin was partying in the Newport Hotel with his pals, including Lil Twist, the same dude who was driving Justin’s Ferrari when Chris Guerra was killed.  Justin was caught smoking weed right in plain view in the hotel room the day after poor Chris died trying to catch him smoking.  Chris had reported to his friend during his last phone call before he was run down and killed that he had seen Biebs hitting  a marijuana pipe and was following his car in hopes of getting a photo of more of  the same.

Of course his people strenuously denied that little Justin was smoking.  To add more insult to the poor dead photog Justin’s propaganda machine put out the story that Chris had been harassing and stalking Justin for some time prior to his death.  Of course neither Justin nor his people had any evidence for their claims. Well now we know who the liars are, don’t we?

Selena should be delighted as well with Justin’s partying and illegal drug use since he managed to get an unidentified young woman to sleep over in his room after the party died down.  Time for Selena to get serious about STD testing, no?  If you think Justin cheating is some sort of hater-generated rumor, then read this!

TMZ has the pics and reports:

Sources at the party tell TMZ, Bieber’s BFF Lil Twist was there too — the 19-year-old rapper who was driving the Biebs’ Ferrari at the time the paparazzo was killed.

According to sources, Twist and his brother were rolling all the blunts and smoking everyone up … and there was a LOT of pot smoke.

It’s pretty ironic — considering sources close to Bieber were insistent … the photog who was killed lied when he said Justin was smoking weed hours before the fatal accident.

And there’s this — we’re told Bieber had security present … but no one seemed to mind that people were snapping photos.

As for talking points — sources tell us Bieber was chatting it up about how tired he was because he’d been staying up late recently. Shockingly, we’re told the conversation eventually turned to late night fast food … and where they could get it.

We’re told a girl also crashed in the hotel room with Justin — NOT Selena.  It’s unclear if they hooked up.

Yes folks, there is ample proof that Justin Bieber is a weed smoking cheating wannabe who lends his fancy cars to cool rappers so that they will pretend to be his friends. Pathetic isn’t it.  Justin is turning out to be just like his father – only difference is about $100 million.
Photo Credit: FameFlynet