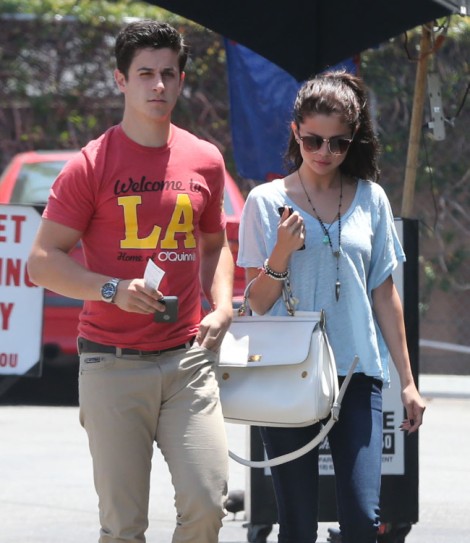 Well, if at first you don’t succeed, take your tops off girls! That’s truly the message I’m getting out of this story. Selena Gomez is so desperate to shed her Disney image and break out from under Justin Bieber’s mammoth, roidy shadow she’s willing to flash her money makers for the cameras. A source told HollywoodLife the Come and Get It singer is just waiting for the right part. Selena Gomez’s boobs won’t come out to play just for any old project.

Ugh, fine. I get it. This is Hollywood. Selena Gomez is trying to make it as an actress. Spring Breakers was a flop so it failed in its attempt to launch her out of her goody goody persona. I suppose she felt pretty left out at the Oscars during Seth MacFarlane’s We Saw Your Boobs song. I’ve really have no problem with women doing it at all. I have a problem with young actresses doing it because they think it makes them edgy because that’s not the case. There’s a HUGE difference in Elizabeth Berkley flashing her tits in Showgirls and Kate Winslet flashing hers in just about every movie she’s in and edge has nothing to do with it.

Jennifer Lawrence, a peer of Selena’s, won an Oscar and she didn’t  have to show her boobs to do it. Just saying….

Oh, but why rain on her parade? A topless Selena Gomez is an enlightened, free from Justin Bieber Selena Gomez so let’s let her run with this. I’d much prefer her to strip for the cameras then strip for Bieber and us see it in some sex tape later on anyway. Who’s waiting for that disaster to happen? Would that be edgy enough for her?