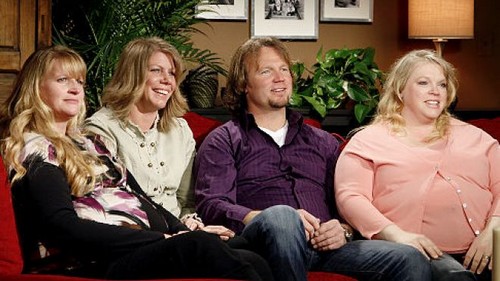 Tonight on TLC the Brown Family returns with a new episode of SISTER WIVES called, “Sister Wives Tell All.” On tonight’s show the Brown family sits down for a one-hour reunion show where they all dish about the season. Did you watch last week’s episode? We did and we recapped it here for you.

On tonight’s tenth episode Kody and his four wives traveled to a couples retreat to tackle their relationship issues head on. After a meditation session that barely eased the emotional stress, the Browns finally made a discovery on the root cause of their internal conflicts.

On tonight’s show the Brown family is back on the couch and ready to tell all in a revealing hour-long reunion special. Kody, Meri, Christine, Janelle, and Robyn sit down with NBC’s Tamron Hall to set the record straight.

We will be covering Sister Wives Reunion show tonight at 9 PM EST [CLICK HERE] so don’t forget to come back to this site for our full and detailed recap.  Make sure to refresh often to get the most recent details.  While you wait for the recap, let us know how excited you are about the new reunion show of Sister Wives.

The Brown Family is back and they’re ready to talk about their last season. So of course the first thing that must be discussed is the “homes” drama. Remember when the women were constantly being told none of their homes will be ready all at the same time.

The family is discussing frustrations with that issue when Meri’s comment from earlier pops up. Meri once said that living so close to each other after so long is going to stir up some issues. Particularly jealousy! Meri tries to explain her comment. Without pointing out fingers she explains that it’s natural for a wife to wonder where Kody is and is now able to look outside and easily locate him.

Christine admits to that jealousy. Unlike everyone else she says she does feel that she has moments of wondering where Kody is and with whom. However her bravery doesn’t inspire the other women to come forward.

There is more to talk about though. For instance the baby question with Meri and Kody. Reviewing the footage the moderator can’t help noticing that Meri was willing to say yes and Kody was the one that kept saying no. She brought up because later that day Meri had went to Robyn and told her it was a joint agreement when in reality it wasn’t. Meri explains that she couldn’t have the baby by herself. Both parties would have to agree.

Anyway, as she goes on, she wasn’t fully committed just yet. She wanted to look into it more and Kody says that’s why he didn’t say yes. Meri tended to need more time to look into it. Even though audience saw the moment on television where Meri broke into tears about becoming an empty nester. Kody goes on to say that Meri will never have an empty nest. There are plenty of little kids running around that need nurturing.

The moderator asked how Meri would feel if Kody and Robyn have another baby. She says she’s been through it before. Many times actual with Christine and Janelle. Yeah it hurts but she’ll be fine.

Now Robyn’s turn. This season she talked about her sexual past. All the wives were told upfront about her past and they felt ok with her joining the family. It was a hard experience but Robyn felt good telling the kids what happened.

Dating and premarital relations is a big concern for the family. Christine’s daughter is known for being boy crazy. Luckily they have rules they live sternly by. The kids can group date by 16 and at 18 the parents may consider one on one date. They won’t like it but at least they will consider it.

Still none of these issues caused as much strife as when the family did the panel. The family felt they listened and even validated the horrible ways other people live through plural marriage but no one was capable of listening to their side. The one where plural marriage worked. They were saying that their family is how it’s always done but polygamy doesn’t have to be filled with abuse like the other side came close to implying.

The moderator moves away from the adults for a minute to discuss this past season with the older kids. The question they are always asked is if they would live plural when they’re older. Janelle’s children are all firmly into monogamy. Mariah is a definite on polygamy and Christine’s daughters feel that they don’t know for sure just yet. Why is that?

Back to the adults. The question of a fifth wife comes up. Kody evades the question to the point that Christine showed concern. Kody says he’s not actively looking but neither was he looking for a fourth wife. Robyn kind of just happened. Way to continue evading, Kody!

Yet they hate the jokes they get. When women asked if the wives are nervous Kody is flirting with other women. Or when someone comes up and volunteers themselves as the fifth wife. It’s not funny and they feel it demeans their marriage. They have a lot of work to do but at the end of the day if something were to happen to Kody the women feel like they would still be a family.