BY Cate Meighan on August 13, 2013 | Comments: 2 comments
Related : Reality TV, Recap, So You Think You Can Dance, Television 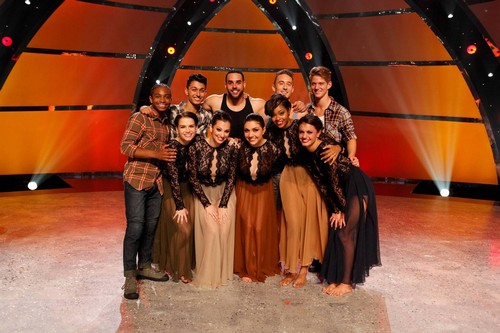 Tonight on FOX SO YOU THINK YOU CAN DANCE continues with a new episode. On tonight’s show as the remaining ten dancers vie to win the America’s votes in their quest to become America’s Favorite Dancers. Did you watch the last episode? We did and we recapped it HERE, for you!

On last week’s show the field was whittled down to the Top 10 and the All-Stars were revealed.   As always, the judges will made the final decision.  Our Top 10 contestants are: Hayley Erbert; Jasmine Harper and Aaron Turner; Nico Greetham; Makenzie Dustman and Paul Karmiryan; Amy Yakima and Du-Shaunt “Fik-Shun” Stegall; Jenna Johnson and Tucker Knox.

On tonight’s show the 10 ten dancers have been chosen and we are entering the second phase of competition when the hopefuls meet the All-Stars, so make sure you keep voting for your favorites on their way to becoming America’s Favorite Dancer!  Debbie Allen will be sitting in the judges seat tonight and sadly two more contestants will be eliminated.

So You Think You Can Dance Season 11 Episode 14 airs tonight at 8PM and you don’t want to miss the reveal of the first live show of the season.  Celeb Dirty Laundry will be live blogging the show each week, so don’t forget to come back to this spot at 8PM EST for our live recap!

Gravel Road, A song from the soundtrack to The Village began tonight’s edition of So You think You Can Dance. The top ten are competing and this Christopher Scott routine was a gorgeous contemporary piece with rocking chairs as props. Tonight everything changes with the top ten dancers each being paired with an all-star dancer from a previous season. Debbie Allen is tonight’s guest judge joining Mary Murphy and Nigel Lythgoe on the panel.

We quickly get to who is at risk and Makenzie, Jenna, Nico and Tucker are in danger.

Amy and all star Brandon are up first tonight doing the first disco of the season. They perform to a mix of Whitney Houston’s I Will Always Love You. She survived all of the crazy lifts and the routine looked exhausting. Mary loved it and Nigel thinks she’s coming into her own.

Aaron is up next tonight performing a Stacy Tookie piece with all star Katherine. This is just so far beyond stunning. It was intended to reflect a couple falling in love again and the concept that Aaron always catches her and boy did he. The chemistry was amazing. Total standing ovation. Debbie wants to see it again. Nigel comments on how Katherine is so proud of Aaron and Mary is blown away by these two. He is hands down, my favorite this season.

Fikshun is paired with Melanie who won season 8. They have a sexy jazz number by Mandy Moore set to Feelin Good by Jennifer Hudson and it was smokin hot. Nigel absolutely loved it. He thought Fikshun had a hell of a job dancing with Melanie and that he kept up. Mary thought Fikshun was flying high and Debbie loves how connected they are.

Paul is paired with all star Witney for the cha cha of the night and they tackled J- Lo’s Live It Up. Mary thought they were fast and fabulous. She thinks Paul is getting better each week and Debbie thinks that Paul completely rose to the occasion. Nigel wishes these two would stay together because the chemistry is volatile.

Hayley is one lucky girl because she is paired with all star Twitch for a Christopher Scott hip hop number. They use a dub step version of Bruno Mars Locked Out of Heaven and the result is adorable. They used a conference table as a prop and it was pretty cool. Debbie kind of felt that Hayley was out-shined by Twitch. Nigel reminds everyone that it took Twitch three tries to make it onto the show and now he is a dance institution. Nigel loved that Chris gave them a neat groove to get into and he thinks she’s a dark horse to win. Mary thinks she is a dark horse too.

Hayley is one lucky girl because she is paired with all star Twitch for a Christopher Scott hip hop number. They use a dub step version of Bruno Mars Locked Out of Heaven and the result is adorable. They used a conference table as a prop and it was pretty cool. Debbie kind of felt that Hayley was outshined by Twitch. Nigel reminds everyone that it took Twitch three tries to make it onto the show and now he is a dance institution. Nigel loved that Chris gave them a neat groove to get into and he thinks she’s a dark horse to win. Mary thinks she is a dark horse too.

Jenna and all star Neil are doing a Mandy Moore contemporary piece to I Can’t Make Yopu Love Me. It’s a break up number with Neil not wanting to let her go. Simple and peaceful but stunning as well. Nigel thought it was just beautiful and Mary thought their movement together just melted together. Debbie tells Jenna that she is a choreographer’s dream.

Jasmine and all star Marko are totally in sync to a version of the song of the summer Blurred Lines. They are in matching suits and were supposed to dance almost like they were the same person and they pulled it off. Jasmine actually did outshine him and Mary loved her nuances. Debbie couldn’t keep her eyes off of Jasmine and Nigel loved the quirky style and how it blended all sorts of styles. He wasn’t sure if he was watching one all star or two.

Makenzie is paired with all star Jacob for a Broadway number called Too Darn Hot and it really was. Another standing ovation and Debbie beyond enjoyed it. Makenzie looked like an old Hollywood dancer.  Nigel thought the routine was put together with every asset they are both capable of and that Makenzie is one of the best dancers ever on the stage.. Mary loved that the two matched each other completely.

Nico has his work cut out for him this week as he is paired with all star Comfort for a Nappy Tabs routine. I have to admit I’m stunned because he really brought it for Get UR Freak On. Everyone is on their feet Nigel think Nico was totally into the quirkiness of the routine. Mary is as stunned as everyone else that Nico stayed in creature character and she loved it. Debbie pointed out that getting into the character is why dancers often become actors.

Tucker is paired with all star Robert for a Travis Wall piece. It’s about second chances which is effective because both guys survived near fatal car crashes in recent years. Mary is bawling to hard to talk so Debbie takes over and talks about how gorgeous their movements are and how incredible it is that they are on their feet. Nigel says the stars aligned and magic happened when everyone understood this piece.

Now it’s time to find out who is leaving and the choreographers unanimously decided the guy leaving will be Nico and Makenzie is finished tonight as well. Tune in next week for more SYTYCD.