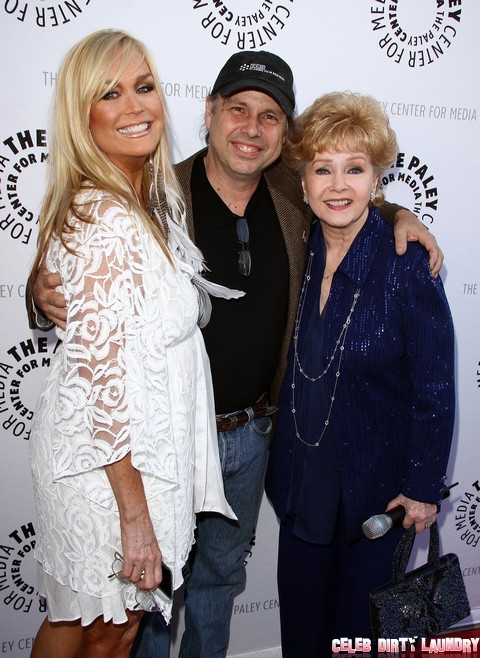 Can the fourth time really be the charm? When it comes to love and marriage former soap star, Catherine Hickland is counting on it!  On December 22nd the actress walked up the aisle to exchange vows with the man that she believes is the love of her life, Todd Fisher.  Yes, his name should sound a bit familiar as he is part of the legendary Fisher family. His father is the late Eddie Fisher and his mother, Debbie Reynolds, is close enough to Catherine to help her plan all of the details of her special day.

The lovebirds tied the knot under a twinkling winter wonderland that was set up in Carrie Fisher’s Beverly Hill’s backyard. The January 14th print edition of GLOBE has all of the exclusive details on the day that Catherine refers to as the best day of her life, so far. According to the still stunning blonde, “I cried walking up the aisle because my emotions overwhelmed me. I was SO happy and wanted to remember that feeling forever. The ceremony was light-hearted, romantic, touching and funny. Most of our guests had tears in their eyes.”

You really need to see these amazing wedding photos – Carrie, Debbie and the whole gang are there – GLOBE January 14th print edition has it all.

Todd’s sister Carrie served as the best man and Catherine’s brother (hair colorist to the stars) Robert Hickland gave her away. When it came time to place a ring on his new bride’s finger Todd presented Catherine with the same ring that his father presented to his mother during their 1955 wedding. The couple then continued in the tradition of Todd’s parents by spending their first night as husband and wife in the same bungalow they had shared more than 50 years ago.

Every bride deserves to feel like a princess and Carrie is grateful to Eddie’s family for making her dream day come true. “Carrie and Debbie did a phenomenal job with all the wedding preparations. It was everything I could have dreamed of- and more.” Grab the new issue of GLOBE to see the amazing wedding pictures and read more exclusive details on this couple’s magical day!