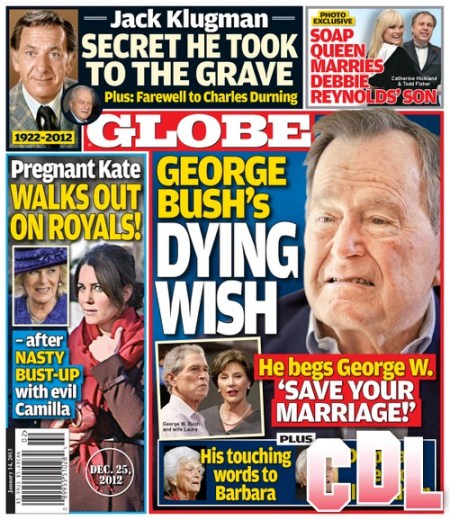 Pregnant Kate Middleton has walked out on Royals after a nasty bust-up with evil Camilla Parker-Bowles, according to this week’s January 14, 2013 edition of GLOBE.  And we don’t doubt it for a second, nor do we blame Kate!  Poor pregnant Kate has been as sick as can be due to acute morning sickness, hyperemesis gravidarum.  This forced the Duchess of Cambridge into hospital and prompted an announcement of  the royal pregnancy weeks earlier than Prince William and Kate had planned.

Nevertheless, the brave Duchess put on her game face and visited first her parents, Carole and Michael Middleton, for Christmas, and then scooted up to Sandringham so that she and Will could enjoy Boxing Day with Queen Elizabeth and other senior royals.  Such was not to be the case.  Despite Kate’s best intentions, which included to be gracious to her arch rival Camilla, things went downhill quickly.

Camilla has been in a panic and rage since Queen Elizabeth decided that Prince William would replace Prince Charles as the next monarch.  The Queen has distrusted Charles’ judgement ever since he carried on a very public adulterous affair with Camilla while married to Princess Diana.  Furthermore, the aging and ailing Queen is well aware of how much the British public despises home-wrecking Camilla while adoring both William and Kate.  So even before Kate’s pregnancy was confirmed, GLOBE revealed Elizabeth’s vow: if Kate could produce a royal heir, she would make William King.  Needless to say, Kate is pregnant and will produce the sought after royal heir and so Camilla is desperate.

Once Charles is bypassed for the crown then Camilla’s dream to be his Queen will by forever stymied.  She will be forced to sit by as she sees beautiful Kate in the position she has plotted to assume for decades.  With this horrifying image of Queen Kate torturing cruel Camilla it is not surprising that she pounced as soon as Kate and William arrived at Sandringham for Boxing Day.  The one blemish on Kate’s otherwise impeccable record as a royal wife is her topless and bottomless photo scandal. So what did Camilla do?  Well we can’t be certain until we read this week’s GLOBE print edition but we are pretty certain that it involves Camilla ridiculing Kate for having her royal boobs and other private parts displayed all over the internet and on magazine stands worldwide.

But pregnant Kate is not the shy lass she was a year ago.  Fueled with all those powerful pregnancy hormones and supported by her gallant husband Kate refused to tolerate Camilla’s nastiness and out of the castle she flounced! Queen Elizabeth must have been mortified at the dispersion of her closest family – and what could Kate’s parents have thought?  I bet Charles wishes he never met the wrinkly old rhino!

GLOBE also features a special report on the dying former President, George Herbert Walker Bush.  It seems the sick man is begging his son former President George W. Bush to save his marriage.  GLOBE also reveals his warm words to Barbara and his desperate plea to Billy Graham.

We lost Hollywood classics Jack Klugman and Charles Durning recently and GLOBE exposes the secrets Jack took to the grave.  I wonder what these secrets are?

It seems the war for the British Throne is heating up and luckily we have GLOBE with their palace sources to keep us up on all the news.  This week the January 14 print edition will tear open the inside story of what went down during the Queen’s Christmas holidays.  We will learn exactly what nasty Camilla did to destroy the royal holiday and cause Kate to walk out of the festivities.  My weekly GLOBE is bought and brought home as soon as it hits the stands.  Once my trusty GLOBE is in my hands I know that a world of fascinating fact and revealing truth is mine.  As I spend the next few hours poring over all the clever analysis and reporting from inside sources my horizons broaden as I become party to information simply not available elsewhere. There is no way I would miss the GLOBE.