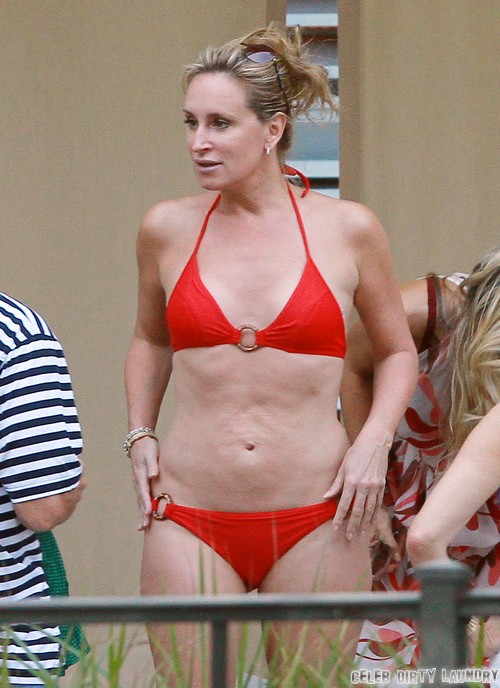 I don’t understand why anyone is ever surprised when a reality stars cheats on their partner. Shouldn’t it be the regular order of business by now? According to reports, Real Housewives of New York star Sonja Morgan has been caught cheating on her 23-year-old boyfriend Benjamin Benalloul with former Bachelor star Lorenzo Borghese.

Sonja was photographed getting extremely cuddly with Lorenzo and she actually admitted that Ben was in ‘Dubai’ that night, and not present. Hmm… an admittance of guilt, perhaps?

Of course, Sonja tries to explain her reasons for spending time with Lorenzo and tries to make it look innocent, saying, “I filmed an all-cast event at Le Cirque [on Sept. 12] and then I organized a dinner party over at Jamie’s restaurant and I invited Lorenzo. And he came to join me for dinner. I know Lorenzo because he and I work on different animal charities together including his own, Animal Aid USA. I hosted Bidawee last year and he came with Tinsley Mortimer, his ex-girlfriend. Howard Stern was also sitting at the table with his wife.”

Yeah, just slyly slip in the fact about his ex-girlfriend so we don’t notice. Except we do notice. A source even adds that things are heating up between Lorenzo and Sonja, saying, “Things seemed to be heating up on the couch at Jamie’s restaurant. When the cat’s away, the mice will play. We’re seeing this pattern.”

And at first, even though it seemed like Sonja was trying to imply her time with Lorenzo was just innocent, when asked about it, she says, “Well, I’m a grown woman. When Ben is away, I have friends and I go out.” Way to not deny the allegations there. She’s obviously trying to use this to drum up publicity, and it’s such a transparent ploy that it’s ridiculous.