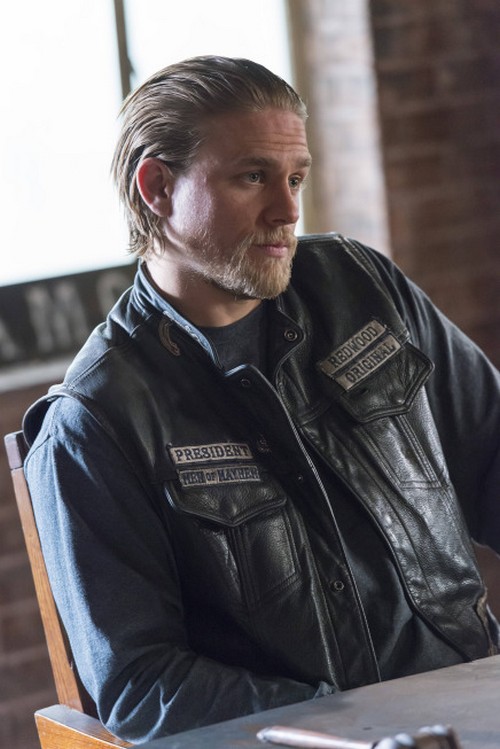 Tonight, FX’s dark-around-the-edges drama, SONS OF ANARCHY, returns with an all new episode entitled “Sweet and Vaded.” During tonight’s episode,Triggers are pulled that strengthen the MC, but also threaten to destroy it..  Did you watch last week’s episode?  We did and we have a full and detailed recap, right here for you.

On last week’s episode the guys confronted their past.  Motorcycle cops who pull over the Charming chapter turned out to be dirty cops running a stolen motorcycle ring. Jax held a summit meeting with all the West Coast SOA chapters; the message was there was too much risk in guns; they all agreed. The state attorney threatened to prosecute Tara unless she testified against SOA. The Sheriff searched the deceased Lee Toric’s motel room; Nero was one crime scene unit away from being cleared of the dead hooker’s murder. The IRA elders still insisted Jax committed a betrayal, but Jax agreed to facilitate the transfer of the gun operation to Clay. Clay is still in jail and it’s unclear how Mr. Marx (Pope’s guy) will react to losing the gun deal.

On tonight’s show things are really starting to heat up – it is not going to be any easy task to make the Irish keep their end of the deal. Nero is still being pressured to testify against SAMCRO.  Tara is going to get slapped by Gemma and the DA tries to pressure Tara to testify against the club.

Tonight’s episode looks like it is going to be great and you won’t want to miss it, so be sure to tune in for our live coverage of FX’s Sons Of Anarchy season 6 episode 7 at 10 PM EST! While you wait for our recap hit the comments and let us know how excited you are about the return of Sons of Anarchy.

RECAP:  Jax is cleaning up the debris in the club, Tara gives Wendy a hug, Gemma looks on while the boys help Jax with the clean up. Tara thanks Margaret for all her help and tells her desperate times call for desperate measures.

SAMCRO finally has a there table set back up, Jax tells Bobby to get the guys.

The DA wants Nero to testify against SAMCRO, then he will walk away and back to his business. This is her one and only offer, she wants Nero to say the gun that killed the kid was from SAMCRO.

Jax is with his guys and tells them he is going to cut Connor lose and make sure everything is ok with Clay. Bobby goes over the financials, he says it is going to be pretty slow for a while. Jax says that Colette and her girls are little spooked by Nero’s arrest.

Jax wants to make George an official member, everybody agrees. Tig goes to get George and Jax calls him to the table. George looks terrified, Jax tells him to take off the jacket and put it on the table, he is in.

Jax is releasing Connor, he tells him to tell the Irish he will go ahead with the plan. Connor thanks Chibs who tells him not to thank him, he wanted him dead,

Nero tells Gemma that the DA wanted him to take a deal, he tells her he doesn’t know what to do, he just wants to think about her. Gemma tells Nero about Venice coming to visit him. Gemma tells him that Alice has the boy and he makes her promise to get him away from Alice.

Jax sees Venice and is not happy, Gemma tells him that she needs their help. Jax and the boys sit down with Venice and tells them that his 15 year old nephew is with his mother Alice, who is abusive. Venice goes on to say that Alice would get her drunk and try to straighten him out by making her have sex, all the while Alice filmed it. Venice has tried to reason with her mother to get Joey out of there, but it didn’t work. Jax smiles at Venice and tells her he’s a sucker for a pretty face.

The DA goes to Charlie, tries to pressure him into helping her nail SAMCRO.

Venice has brought Jax, Gemma, Chibs and Bobby to the house. They knock on the door, then go right in. Venice wants to take Joey, Alice calls Venice names and he begs her not to do anymore. An old man that is in the house shoots off a gun, all hell breaks loose and Alice gets away in the van with Joey. Everyone gets in the car and chases after them. Venice confesses that Joey is her son while they are still chasing after them. The old man starts chasing their vehicle and Venice grabs a gun and starts shooting them. Jax stops the car and they loose Alice and Joey.

Margaret tells Wendy it is time for the meeting, Tara is with Unser and the kids. Unser asks Tara if everything is ok, she says yes and he hands her the restraining order. Unser wants to know who this order is going to be against and she says it is all going to make sense.

The boys find where Alice is keeping Joey, when they break inside they find Joey passed out, she has drugged him up. The place is a photo studio, all of a sudden, Alice walks in with her two men. Venice grabs a gun and points it right at Venice’s head. Venice takes down the gun, Jax throws out the two guys and then Alice tells off Venice, tells him that Joey is going to grow up hating her for being a transvestite and blow up his own brains. Jax shoots Alice right in the head, she is dead. Charlie tells Jax if he didn’t shoot that b*itch, he would have. Jax tells Venice that she should tell her son the truth, when he finds out what Venice did, he is going to be proud of her.

Gemma is with Bobby, she tells him that she is so happy that he is back. Wendy tells Gemma that Tara told her that her commitment to the boys was wavering and she picked Margaret for guardian. Wendy warns that she thinks Tara is going to box them and Jax in somehow.

Gemma goes to see Tara, tells her that they need to speak right away. Gemma is furious, Tara gets up and leaves. Margaret also gets up and Gemma shoves her into the wall and goes for her throat. Gemma then goes into a room with Tara and they start to fight, they slap each other and Gemma tells her that she is lucky she is pregnant. Tara throws herself to the table, she starts bleeding and when Wendy, Margaret and Unser walk in Tara says that she was attacked by Gemma. Tara then starts screaming that she wants Jax. Security comes in and they take Gemma away. Jax runs in and finds Tara in a corner all bloody. Little does anyone know, Tara planted the blood, it is not real and Margaret knows all about it. Tara set up Gemma who is now arrested and going to join Nero in prison.

Wendy is in the chapel, Unser joins her.

Tara is in the hospital, the doctor is examining her and asks him to leave the room. Venice is seen hugging her son, Tig puts his arm around Venice for support. Jax is really upset at the hospital, then we see Gemma being booked in while Nero is lying in his cell. Tara is now dressed in a hospital gown, Jax walks in to see her. Tara tells Jax that she lost the baby and she can’t be around Gemma any more. Tara tells him that Gemma kicked her in the stomach, then asks what kind of sick person does that. She goes on to say that Gemma is still afraid that she is going to take the boys away from her, then she asks Jax to promise that Gemma will never be aloud near the children again.

Margaret is with the children and looks very happy. Jax is signing some papers, I bet it is the restraining order against Gemma.