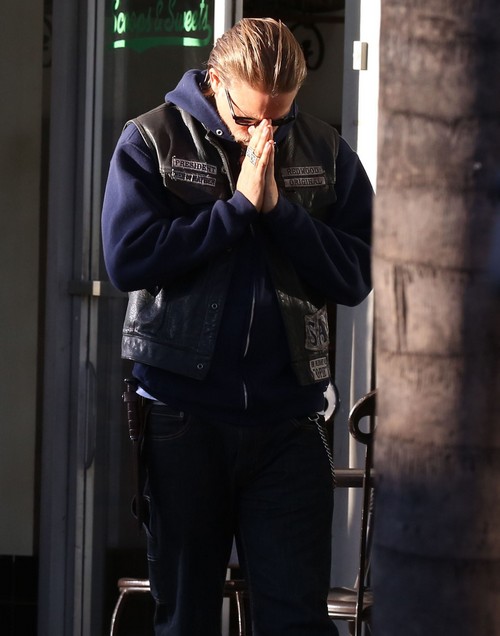 Sons of Anarchy Episode 12 Season 6 was great and we review it for you below.  You can also read our live recap of the episode here.

Jax is with the DA. Jax is trying to do some slick cover his own ass work while telling her he delivered on his promise. The DA is neither grateful or stupid enough to buy what he is selling. However she admits he is smart. She tells him when they finish the investigation she will let him know if he kept his end of the deal. Jax admits to Chibs and Tig that she knows he got played.

Tara is sitting with Bobby when the DA calls. She tells Tara she will get what she wants all she has to do is give her the bullet. Tara rushes her off the phone because Bobby is waking up. He grabs her hand, thanks her and passes back out.

Unser is helping Gemma feed the boys. Able misses Tara. Neither knows what to say.

Connor is taking to Jax. Jax wants him to talk to August. Jax tells Connor to be careful the Chinese might hit him if they find out Galen was killed.

Tig is in the barn with some of Connors men to see that the guns are there. It’s a set up and Tig and the boys start shooting. After it’s over one of them tells Tig he has some blood in his hair. Tig is upset and says not the hair man not the hair. He looks at his reflection in the van, sees the blood and puts his head down.

Jax is outside the barm meeting with the Chinese. Now I know what happened to the Professor that was helping Bill in Bon Temps. He took his bag full of money and invested in the illegal gun trade, it’s a living I suppose. Jax takes full responsibility for what happened to Galen much to my surprise. They want to see the guns and they want Connor. Jax tells them it’s not going to happen. The Chinese let Jax know that means they are not giving Happy back. Jax wants to talk to August like yesterday.

Nero is chilling in his office in the finest little whorehouse in charming doing some cyber Monday shopping on his lap top no doubt when one of his guys comes in. The man gives Nero crap for turning his back on his old crew for SAMCRO. Nero gets pissed about it and makes excuses. He wants Nero to talk to the Myans. Nero agrees to do it.

Tara tells juice she needs to get supplies. She leaves the cabin followed by her shadow. Juice checks on Bobby. Juice brings up Clay and why Bobby voted to kill him. Bobby tells him it made sense. Juice is not feeling like one of the good guys right now. Bobby tells him to go to Nero’s place of business and get a massage, pop a few oxy, and get some head. Bobby tells him he is making everyone nervous including him. Juice tells him he will be fine. Bobby tells him it wasn’t a suggestion. Bobby calls some biker in and tells him he needs him to hold his junk while he pisses, he tells him he is going to need both hands. The guy looks at Juice and ask if Bobby is serious. Juice straight faced says yeah he is huge, your gonna need both hands. The look on the guys face is priceless. Juice snags some of Bobby’s pain pills and leaves. You can see the guy standing next to Bobby in the background.

Jax spins a tale to Connor about the truck being found three miles from the barn, with all the guns missing and all his men dead. Jax leaves out the part about Tig and company being the ones who did the deed. Connor freaks out and with a little persuasion from Jax and the fact that he is pinned in a corner finally agrees to meet with August. Jax tells him he will set it up.

Gemma meets Tara at her job. Gemma wants anti nausea pills for Wendy. Tara tells her she will look for some and that she has things to do and that she will meet her outside in twenty. On her way out Gemma runs into the DA. They bs back and forth.

The DA meets with Tara who refuses to give her the bullet until she has the paperwork sent to her lawyer. The DA agrees to it.

Jax is at the cabin. Tara and Gemma walk in. Jax follows her to the bedroom. He closes the door and tells her Bobby looks better. Tara ask if the boys are with Gemma. Jax tells her yes. Jax tells her they will figure all this out. Tara grabs him and holds him, she tells him she is sorry. She lets go and goes in the bathroom. Jax and company leaves. Tara tells Bobby to get back in bed.

Juice is at Nero’s. He looks like shit. One of the girls brings him a beer and tries to cheer him up. She takes him upstairs and tells him to get undressed. She ask if he has a preference, he says someone nice. She runs into Gemma downstairs and tells her Juice is there.

Upstairs Juice looking amazing win his shirt off is having a panic attack of epic proportion. He slides down into the bathroom floor and takes every pill he took from Bobby.

Bobby is back in bed, Tara is changing his wound. Bobby tells her he loves her. She smiles and leaves. She sneaks out the bedroom window.

Jax meets with Connor about the whole August thing. The Chinese show up for a little payback. Jax and company plus a solid from August and his men let some bullets fly and before you know it all the Chinese are taken out and they got Happy back who expresses his love for them when they give his gun back. Happy walks over to the guy in charge who isn’t quite dead yet and takes aim and shoots. Tig tells him and we love you and gives him a hug.

Back at the barn Connor is freaking out about what just happened. Jax on the other hand is relaxing with a smoke and tells him to calm down that August will be there any minute.

Chuckie is harassing Gemma with some chinchillas he wants to make into coats and hats. Gemma is not interested. Nero walks in during the convo. Before Gemma and Nero can talk Juice’s girl comes running down asking for help because something is wrong with him. They book it upstairs. Juice is passed out and drugged out on the floor the bedroom. Nero is smacking his face and Gemma is covering his naked self up. Gemma gets a trash can and starts gagging him so he will throw up. It works.

Finally August shows up. August tells him he has a lot of markets if Connor can provide the product he can get him the business. August is so bad ass. He leaves the cash with Connor.

Nero thinks Juice wanted to kill himself. Gemma wants to talk to him before anyone tells Jax. Before she can talk Tara calls and lies to her so she can get the boys. Nero is taking care of Juice. Nero helps get him up. Juice is still high and tells Nero he is sorry and that he didn’t want to do it. That Jax made him. Juice lets it slip that Jax had him kill the little boys mom. Nero lets him fall, Juice curls up in the floor and cries.

Tara walks into Gemma’s and tries to walk out with her boys. Unser is not having it. Tara takes out her trusty lap gun. She puts it away. Unser figures out she made a deal. Wendy however is the one that says it. Wendy tells Abel she is his mother. Tara doesn’t appreciate that one bit and backhands the crap out of her knocking her to the floor. Wendy stays down and cries. Unser opens the door and Tara leaves with the boys.

Gemma is driving when she gets a call, she stops her and turns around.

Connor gets a call from his boss. They are willing to work with August on a shipment and see how it goes. Jax is glad to hear it. Connor is just glad tomget off the road he has been going down with Jax. Connor tells Chibs bye and gets in his car and leaves. Chibs and Tig are really proud of Jax. The moment is short loved however when Jax gets a call from Gemma.

Juice is fast asleep at Nero’s. The hostess comes upstairs and tells Nero Gemma wants him to meet her at Jax’s house.

Tara is driving in the car and she starts singing you are my sunshine to the boys. When Abel ask about his daddy Tara starts crying.

The DA is waiting for Tara but she never shows up.

Tara checks into a hotel with them. It’s raining.

Jax gets home and sees all the kids and Tara’s stuff gone. Gemma shows up. She tells Jax Tara must have made a deal. Jax loses it and destroys Abel’s room.

The DA is sending sheriffs to look for her.

She is laying in bed with the boys.

Nero shows up and Gemma tells him what happened. Nero wants to beat the crap out of him but instead decides to take the high road and comforts him instead.

Next week everything comes to head. Tune in here at CDL on Tuesday evening December 10 for episode 13 – will Tara rat out Jax and the Sons???