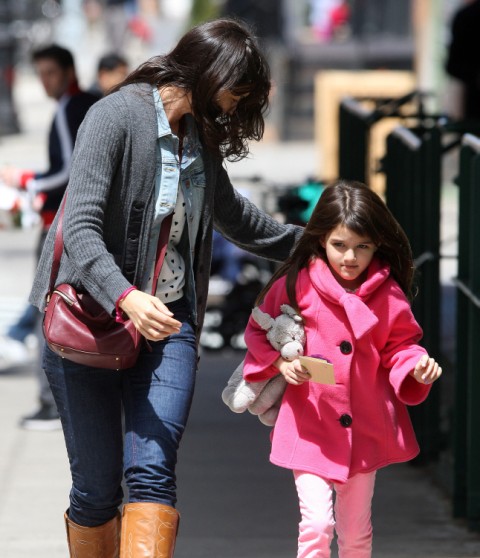 As if the paparazzi-hounded tyke didn’t have enough on her plate this year dealing with her parents’ monumental and odd ball divorce, Katie Holmes decided to throw in a fashion line. Suri Cruise is launching her own line of shoes. I’m expecting A LOT of glitter… and a healthy dose of insight from Tommy. He’s obsessed with LIFTS!

Anyway, according to The Sun, Suri will get $1.5 million for the deal and her shoes will be out as soon as this autumn in NYC. If successful, it would lead to expansion across the U.S. and then a boys’ line… and then world domination in the name of Xenu.  Anyone else nervous?

Supposedly Katie and her fashion line partner, Jeanne Yang, are completely behind it and have been planning it for some time. OK, let’s think about this. Katie’s fashion line sucked this year. She opted out of a runway for fashion week and instead hosted an intimate viewing for her limited line. Critics showered the hate. So might she be turning her attention to the kids’ division? Is this a way for her to use the popularity of her daughter to break into a whole new market? It kinda feels like it. It’s not like celebrities haven’t done it before. Plenty of celeb moms have children’s fashion lines – look at Heidi Klum. But didn’t Katie Holmes seem above that? With her Mona Lisa smiles and her Jackie O sunglasses it appeared the new Carrie Bradshaw of NYC was going for it in the fashion world. Is this a sign that Katie finally realizes that her seven-year-old has more talent than she does?

What do you think of the Suri Cruise/shoes deal? What ever happened to Suri having a normal childhood? If she wanted Suri to be exploited she should have left her with Tom and his religious fanatics. Does this fashion line have more to do with Katie than Suri?