Suri Cruise Has Her Own Lawyer, Stylist, And “Team” (PHOTOS) 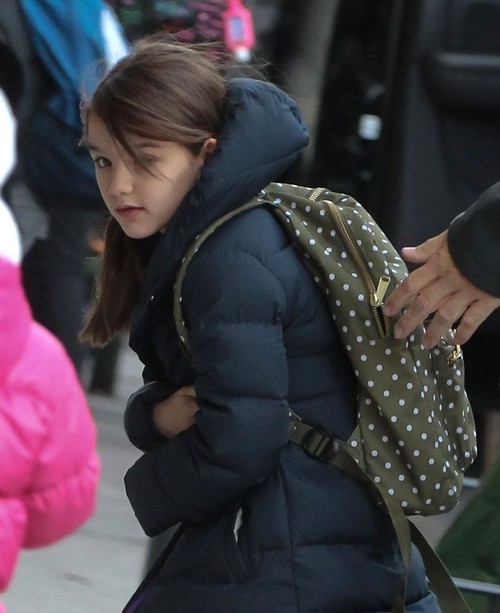 A new report from OK! Magazine claims that Suri Cruise has her own lawyer and stylist. A ‘source’ tells OK! that Suri is ‘eerily precocious’ and acts like a mini-adult more than she does a normal child.

The source explains, “She’s been groomed as a mini adult since she could talk. And Tom [Cruise] does everything he can to mold her into his image.” But alas, Suri apparently has no aspirations to become a world-famous movie star, and instead wants to go into fashion designing. The source continues, “Suri has a closet nearly as big as her bedroom, lined wall to wall with high heels. She has her own personal stylist to organize her outfits and costs $10,000 a month! Katie [Holmes] has retained a separate lawyer — just to concentrate on Suri!”

While I agree that Suri is very precocious, or at least comes off that way, I very much doubt she has her own stylist. She’s 7 years old – even in Hollywood world, 7 year olds don’t have their own stylists. And if Tom was still in the picture, I’d maybe give this report a bit more credibility. But with Katie’s single motherhood and working lifestyle, I hardly think she’s putting aside time and energy to get Suri her own designers.

Now, the separate lawyer thing makes more sense – but not in the financial regard. Because of the way her divorce to Tom ended, Katie probably does have several lawyers taking care of her custody agreement and focusing on getting Suri the right legal protection. But this report is trying to make a 7-year-old sound like a Hollywood diva. She’s 7 and she’s probably spoiled, but a 10,000 dollar stylist a month is pushing the bill, no?