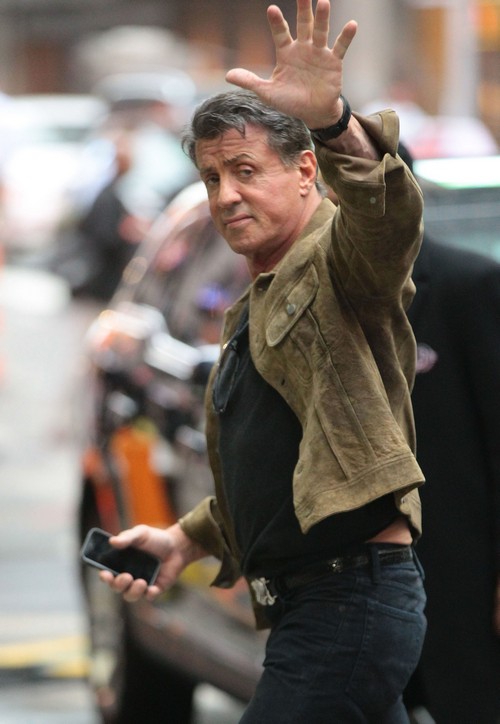 What is with celebrities these days? It’s like they’ve forgotten that there are cameras around, and have just completely gotten rid of social conventions and manners. Actually, it’s kind of a good thing. This way, we know who the racist and homophobic assholes are, and we can boycott their movies accordingly.

TMZ has a new exclusive video where they’ve managed to capture Sylvestor Stallone hurling the n-word at paparazzi. In the video, he’s clearly seen yelling, “This f**king n***er here, this f**ker” towards the paparazzo, outside of Cafe Roma in Beverly Hills. It is VERY clear that Stallone uses the n-word, especially because the female photographer also asks him, “Why the racial slurs?”

The photographers were reportedly African-Americans but TMZ tries to be diplomatic by claiming that they don’t know if Stallone’s racist slurs were directed at them. Um, of course they were. In a singular sentence, he managed to prove that he’s on the same page as the rest of his idiot colleagues, including Mel Gibson and Alec Baldwin.

Obviously, Stallone is now trying to do damage control as the video spreads like wildfire across social media. Stallone’s rep tells TMZ that he claims he ‘never’ used the n-word, and he was instead trying to say, “F**king Ass**le.” What?!! That’s the stupidest excuse ever, considering that doesn’t sound anything like the initial sentence he uttered. It doesn’t even have the same number of words!

His rep also claims that the ‘racial slurs’ comment from the photographer was not directed at Stallone. Oh, so I suppose she was speaking to an invisible companion, was she? His excuses are ridiculous and pathetic, and not even close to believable. You can clearly see Stallone saying the n-word in the video, and not only that, but his vitriol seems largely unfounded based on the footage.