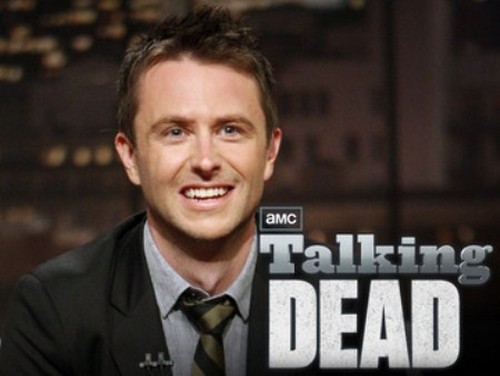 Talking Dead returns this evening with special guests Chris Jericho And Gillian Jacobs. Did you watch last week’s episode of Talking Dead? The special guests were pop star Marilyn Manson, reality TV star Jack Osborne and The Walking Dead producer Gale Anne Hurd were the celebrity guest.  If you missed it we have a full and detailed recap, right here.

This week on Talking Dead joining Chris will be celebrity guests wrestler Chris Jericho and actress Gillian Jacobs. Chris is best known for his work with World Wrestling Entertainment. Gillian is best known for her role as Britta Perry on the NBC comedy series Community.  Generally a cast or crew number of the Walking Dead participates but no one has been announced for this week’s show.  They both will discuss the evening’s proceedings and take your questions live.

RECAP: Chris Hardwick introduces his guest Chris Jericho and Gilian Jacob, Chris asks them about their reaction with Carol being kicked out. Gillian did not see that coming whatsoever, she was surprised. Jericho says that through out the whole episode Carol was very cold towards murdering people and believed Rick had to let her go because of her very apathetic nature. Jericho believes that she is like the Walter White of Walking Dead; she went from innocent house wife to cold blooded killer. Chris believes Michonne and Carol have switched roles. Chris asks what they feel about Carol having to go find a new group, Gillian says that she has no choice because she did something Rick can’t forgive. Jericho feels that she did something that many people would not agree with him and that Tyreese would kill her; it would have caused a mutiny in the prison. But Gillian felt like he was becoming more rational from the end, Jericho asks how Rick is going to say about Carol leaving the group. Chris believes Rick could not lie to the group, then believes people would side for him. Chris says that Daryl could have everyone in that show, he felt it was very intimidating the way he treated Bob.

A fan comes up from the audience to ask how they think the group will suffer without Carol; Chris mentions how nobody else will be taking care of the kids. Jericho mentions she is the first graduate of zombie apocalypse university because she is knowledgible about medicine and a warrior. Gillian is hoping people will be accepting of the matter and all will go well hopefully. Chris then says he feels like there is more going on with Rick about being threatened with her presence because of her leadership now. Gillian believes that Rick found killing off the sick people without even taking it into consideration of the people was cruel; Jericho mentions that you have to lose those human attachments to survive in this world. Jericho then mentions that the apocalypse was the best thing to happen to Carol because of how she took into charge. Chris then mentions Rick was afraid of Carol because of how she killed without caring; Jericho is on Carol’s side and has a feeling she might make her way to the prison.

Chris then mentions if seeing how much Carol has changed in this world makes him worried about Carl, Gillian says that it surely is because he could turn into a zombie or some sort of sociopath; it’s a sick world for a kid. Jericho mentions that it’s hard to have to be in a group with kids because you’ll be bias for them in the group; he believes a leader should have no emotional attachments. Chris asks if Rick’s choice was something he’d regret; Jericho says that it was worth it because he doesn’t want to have the prison get split up. A caller asks about Lizzie being twisted, Chris feels that she seems like a smart kid. Jericho says that she almost saw her father become a zombie and they see zombies die a lot; she’s pretty much adapting to the world they are living in. Gillian says she made a pretty good statement about growing up and changing, then what’s wrong with being a walker. A fan asks if the woman are stronger than the men this season, Jericho says that in this episode it was all about letting things go with how Bob couldn’t let the alcohol go, Tyreese didn’t let the zombies and how Rick let Carol go. Chris says that the walls of the prison are in trouble; Jericho and Gillian believe the group will have to move on sometime soon.

Chris asks what it means for Michonne giving up on the Governor, Jericho mentions she is showing a lot of emotions right now and that she is pretty happy.He believes it will come back and bite her in the ass later on; Gillian says that the show is amazing with how characters get speechless like Michonne when talking to Tyreese. Chris says Tyreese is pretty dangerous, Jericho says he is to impulsive and would not trust him to go on a mission. A fan mentions that Rick could have saved Carol from certain death by Tyreese’s hands; having her leave assured her survival.

Chris says when he watches the show and he feels like he would die fast in such a place; Jericho says the show is more about survival than anything. Gillian says that with contacts and bad vision she can’t see well and would probably die really fast.

Another fan comes up and it’s Mike from Comic Book Men; he asks who they think is going to be worthy of being exiled Bob or Carol. Jericho loved the reveal of how the bag he never let go was only a bottle of whiskey; he thinks the addiction could only make things go wrong. Chris asks if the prison could live against the mega herd; Chris says that many of the fighters are gone and everyone would be screwed. Jericho says that Carl is like the John Connor of this world, he would do anything to save the prison. A caller asks about at the end of the show with Carol handing over her dead husbands watch to Rick; Rick also gave a watch away to the two people he found. Gillian says it was sentimental with how Rick gave away his watch and now Carol gave her to him since he lost his. Chris says he felt bad about Ana being killed, Jericho loved her and was sad when she died.