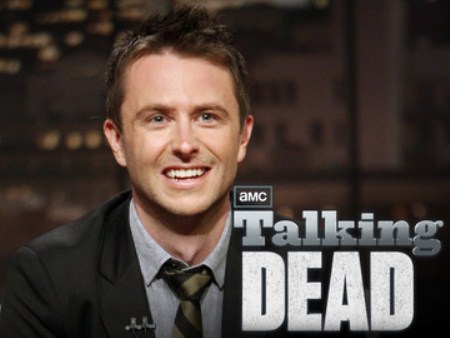 Talking Dead returns this evening with special guests Marilyn Manson, Jack Osborne and Gale Anne Hurd. Did you watch last week’s episode of Talking Dead? The special guests were special effects creator Greg Nicotero making a return appearance, stand-up comedian Doug Benson, and Paramore’s Hayley Williams was our celebrity guest.  If you missed it we have a full and detailed recap, right here.

RECAP: Chris introduces his guests Marilyn Manson, Jack Osbourne and Gale Anne Heb. Chris asks about the Carol thing and was shocked by it, Gale says they have twisted mings in the writing room and they decided on the badass Carol. Marilyn mentions that Carol is the wild card but Chris believes she was very logical this season and that Rick is so confused what to do. Jack says that all the characters have a killer kind of moment in the show, Chris says that he has no idea if she has been like this forever with Carol being this kind of person or different. Chris asks Jack if the body burning was justified, Jack beleives the people already died and that what she did was probably the smartest thing to do. Gale says that the assumption is that they might not have died yet but there is no way to find out whether that happened; Marilyn believes that Rick is going to be making a big come back into being a prime character in the show. Chris says he believes Carol could be a leader with all the actions she is taking, Chris asks if she needs some sort of punishment for what she did. Jack and Marilyn mentions that they should probably have some sort of judging on her; Chris mentions that Carol is pretty level headed and she takes all the hard choices but if the break down was because the disease spreaded any ways and that killing them wasn’t needed.

Chris asks Gale about the whole Tyreese and Rick fight; Gale says that Tyreese got pisses when Rick told him that Karen wouldn’t be happy about what he did. Chris thought that he was such a passive guy at the beginning, Jack mentions that nothing like a punch to the face that unleashes the potential of being a true bad ass. Gale mentions that Rick is a rageaholic that always goes beyond; Marilyn mentions that once Rick puts the hat back on things will change. A fan mentions if it is important to care about others in an apocalypse; Marilyn mentions that there are always consequences even in an apocalypse that even if they do not follow the morals. A caller asks what would happen to Carol if Lizzie dies; Gale says that she might become someone like Beth who just shuts off their emotions. Chris says that she looks like she has because of how she deals with current situations in the prison.

A fan comes up and asks Gale what happened with Tyreese sitting in the car; Gale says that he decided to go on and live to see what could happen. Chris says that he felt that Tyreese and Rick both have finally woken up; Chris says that Karen’s death might have actually been good having him wake up. Gale believes that Rick went so far that after keeping it down for so long his rage just exploded and he’s back in action. Chris asks if they ran away to leave Tyreese to die, Jack says that when it hits the fan everyone just decides to run for themselves Chris asks about the car over the zombies; Jack mentions that a horde of zombies will always ruin your day and listening to the radio almost got them killed.

Chris asks how long it took to shoot the scene, Gale says it took them a long time to do such a scene. Marilyn says that The Walking Dead is very well done and that they are really showing how television could be as interesting as movies at a cinema. Gale the mentions that the loss of the car has now brought them back behind schedule.

Chris asks how Gale got the mega herd of zombies on to the screen so well; Gale says that they try hard to make it unable to tell the difference to the zombies that are actually people and others who are CGI. jack mentions that a lot of gasoline and a lighter would get rid of that herd quite well. Chris mentions that having Hershel and Carl being together in the woods felt very weird.

Gale mentions that what Hershel is doing is smart because if nobody comes back with medicine he’s helping them get better in a different way that could prove successful. A caller asks if the council will ever put anyone to death, Jack mentioned that something like that happened in the second season and they actually did put someone to death.

A fan comes up and asks Gale about the radio and what they can be heard about this; Gale mentions that it offered sanctuary and if we’ve read the comics we could possibly know where it leads to. Jack thinks it’s going to be another tribe of people who have a better technology. Chris asks about how Hershel made Carl not shoot the zombies; Hershel kind of wanted to teach him that at times you don’t have to shoot the zombies. Marilyn mentions that the one feeding the zombies could be Lizzie because of her obsession with the zombies; Gale mentions it’s easy for them to find a home.

A fan asks who Gale is most excited about with their character progress; Gale says Tyreese and Carol will be the most interesting this season having already shown how much they have changed.