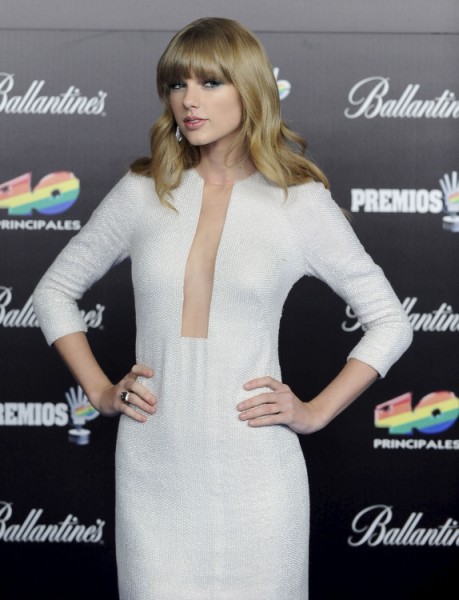 Wait, you mean Harry Styles held his ground? The incessant phone calls, threats of humiliating songs and causal stalking stop in London did nothing to sway his cold English heart? Good for him!

It turns out Taylor Swift’s layover in London didn’t involve the reconciliation so many were hoping for. According to Page Six instead of rushing to his ex-girlfriend’s side, Harry partied with a “hot blonde” in East London on Tuesday night. It specifically points out it was not our girl. By Wednesday she was long gone to attend the 40 Principales Music Awards in Madrid. Taylor Swift looks amazing in these pics actually. I’m liking this new vixen look she’s been sporting. She did the same thing at the Golden Globes only this time she didn’t hide her boob job. She let it all out there and showcased a little of that tasteful cleavage. Perhaps she’s on the prowl again or maybe she wants Harry to see exactly what he’s missing. Did Taylor Swift flash for Harry?

Luckily for us, he won’t have that long to ruminate on his rude boy behavior in London. As I’ve already reported, the couple are set to get together for the NRJ Awards in Cannes this weekend and are even rumored to be staying at the same hotel. London’s an awfully large city. Despite Taylor’s best efforts to run into Harry by staying in a hotel just steps away from his place he still managed to keep a healthy distance. I’m not sure he’ll be so lucky in Cannes. If I know Taylor (and it’s safe to say I don’t) I’m sure there will be some planned awkward elevator rides. But this kid has impressed me so far. Let’s see if he can manage to stay broken up while Taylor’s in the same room with him. That little minx is cunning! Can Harry Styles avoid Taylor twice in a week?